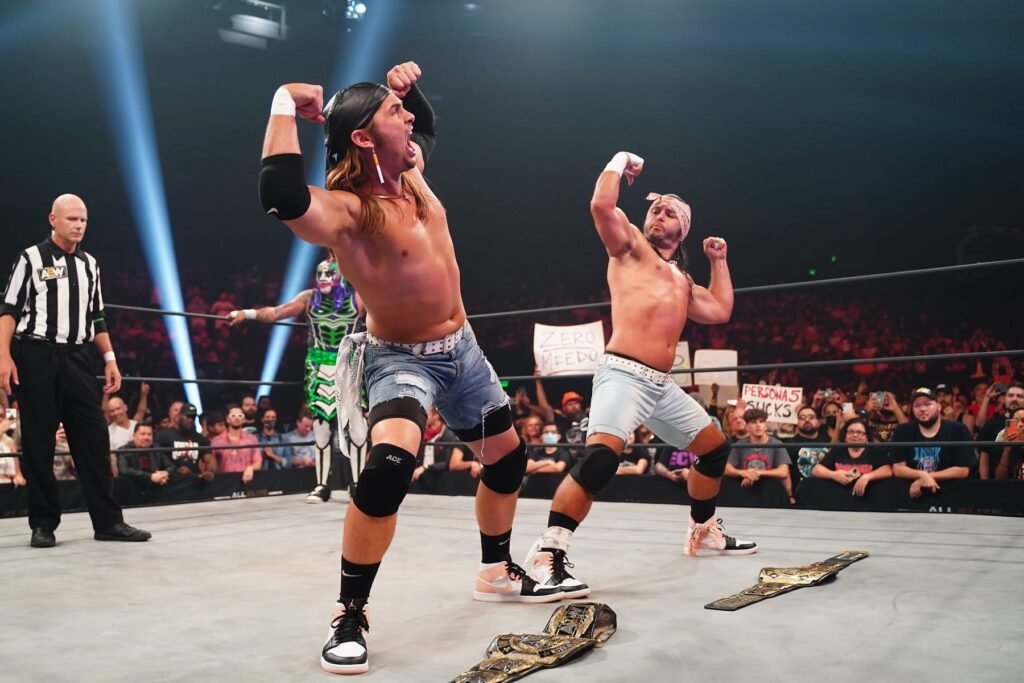 The Young Bucks are one of the biggest name in tag team wrestling over the last 20 years, being one of the greatest and most influential tag teams of their generation. Matt Jackson and Nick Jackson have transformed tag team wrestling from the peripheral to the main event, with their work in PWG, ROH, NJPW and AEW drawing comparison to some of the best runs in the history of wrestling.

Their influence only grew when they signed on to Executive Vice Presidents of AEW, an upstart wrestling promotion helmed by Tony Khan in 2019. The duo became instant stars in the promotion, and helped it draw a regular viewership of around a million viewers per week in the US alone.

The name The Young Bucks has become synonymous with top quality tag team wrestling for the best part of two decades. In NJPW, they became the top team in the Junior Tag Team Division, becoming multiple time champions. This earned them huge money offers from WWE in 2018, although they would eventually turn them down the help form AEW.

However, The Young Bucks were not always known as their current in-ring names. In fact, their real names aren’t actually Nick and Matt Jackson. Their real surname is Massie, and they were given the name Jackson by a promoter at the start of their career.

Early in their careers, when they ran their own backyard promotion (which they talk about in detail in their book “Killing the Business“), the pair wrestled under different names. Nick Jackson wrestled under the name “Slick Nick”, whilst Matt was known as “Mr. Instant Replay”, a far cry from their current characters as part of The Young Bucks and The Elite.

In an interview with Chris Jericho on an episode of Talk is Jericho, the Young Bucks revealed that it was not them who came up with the name “The Young Bucks”. Instead, it was a promoter at one of the first shows they teamed together at, and came about because nobody could remember their names as they were such unknown wrestlers at the time.

“I was ‘Mr. Instant Replay.’ I wore red. [Nick was ‘Slick Nick’] and he wore blue. It never really crossed our minds, like ‘Hey, we want to be a tag team.’ It was just always we wanted to be a singles wrestler, at that time at least. We get to this show where we were just so happy that we even got booked because at the time, we’re making $25 a shot, and the guy in charge, he’s like, ‘I’m gonna pay you guys $75 each. And we’re like, ‘Holy crap. $75? We can make a living doing this if this is how we get paid.’ So we get booked and we go to the card.

“And we’re looking everywhere for our names. Where’s Mr. Instant Replay and Slick Nick on the card? It’s not on the card, and all of a sudden, we ask Joey, ‘Hey man, we’re here to wrestle.’ He’s like, ‘Yeah, you’re on the card right there against us.’ I go, ‘Excuse me?’ So I look on the thing, and it’s Joey and his partner at the time Mongo.

Now, The Young Bucks name is known across the world and they are some of the most popular wrestlers on the planet. It’s a far cry from Mr Instant Replay and Slick Nick, and a vast improvement I’m sure the duo would admit.

Did you know what they are called the Young Bucks? Let us know in the comments or click below to read more