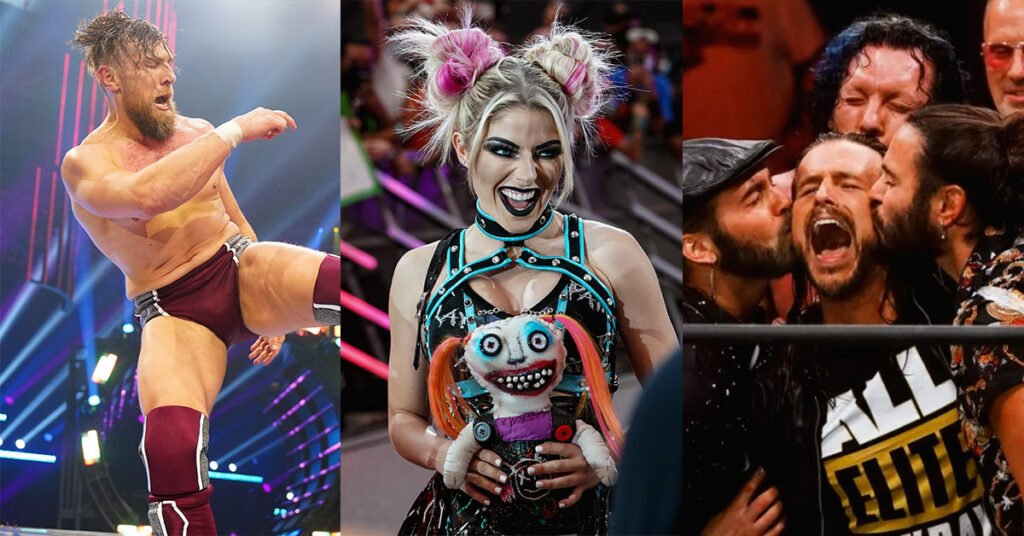 WWE in the past few years could have claimed to have one of the best rosters of all time. When their stars included Daniel Bryan, Seth Rollins, Jon Moxley, Bray Wyatt, Chris Jericho, John Cena, Brock Lesnar and many more, it’s hard to see how you can fail. But they did. They failed their superstars. Not wrestlers, as CM Punk keeps pointing out. Sports Entertainment does not equal wrestling. But WWE is holding back their superstars. That much is clear by the success of AEW, and how the former WWE talent has spoken about their time there.

WWE is holding back their superstars

From a young age, many wrestlers have one dream. To stand in a WWE ring, in front of thousands of cheering fans at Wrestlemania. To perform at the highest level for WWE is a self-confessed dream of many WWE superstars. Yet, when the dust is cleared and all is said and done, so many aren’t sad to leave WWE. Some, like Daniel Bryan, are. He had a great time in WWE, meeting his wife and conquering the wrestling world. Others, like Adam Cole, wilfully left due to the way WWE runs it’s company and because he saw an opportunity in AEW to make magic. And no matter those who are happy or sad to leave, they are very rarely unhappy to stay gone.

AEW stars have shown that. Bryan Danielson made it clear that no matter how much he loved WWE, he HAD to leave. He needed the freedom AEW provides, or the lack of freedom WWE does. It’s hard to feel motivated in WWE, when you’re wrestling 200 matches a year, working through injuries and at the whims of an 80 year old man who barely remembers your name.

These wrestlers become wrestlers because of the creativity of the sport, and WWE is stifling that creativity. Leaving the entire creative (which gets ripped up hours before the show airs and rewritten) up to Vince McMahon has led to some frankly embarrassing and wasteful storylines, like Nikki ASH and her moronic “Almost a SuperHero) gimmick, Alexa Bliss and her ridiculous doll, and who can forget Retribution.

The constant threat of release also must wear on the talent. When you see a top merch seller in Bray Wyatt kicked to the curb, or recent world Champion Braun Strowman being released, then you know nobody not named Roman Reigns is safe. WWE has not only held back their superstars by creatively stifling them, it has made them fear for their jobs regardless of their job performance.

Bryan Danielson has shown in one match the pitfalls of WWE. Bryan Danielson vs Kenny Omega was the greatest AEW match ever. I will die on that hill. I have watched it three times today and it still impresses me every single time. By my money, it is also the best Bryan Danielson match of his career. I have seen all his WWE run and handful of his best Ring of Honor bouts, and can comfortably say this beats the lot. His matches against Triple H and Brock Lesnar were my favourite matches ever, before today.

A motivated Bryan with a clear story ahead of him, all healed of his injuries is a license to print magic. Without the stress and lack of creativity in WWE, even a simple “I’m better than you” story in AEW has made this the biggest match of year before the bell even rang. And once it did, a new beast in Bryan Danielson was unleashed.

Lets not also forget his opponent. AEW Champion Kenny Omega also performed at his usual, sky high level. He also turned down WWE, for the exact reason already lifted. He is a creative, and having someone of his talent going 50/50 with Baron Corbin each week on Smackdown would almost be a crime to wrestling. Omega knew that WWE, despite offering more money and a bigger stage, would hold no satisfaction for him. I’m sure many others, like Adam Cole, think the exact same way.

I’ve also written at length about how WWE used it’s legends compared to AEW. AEW Legends Sting, Christian Cage and Tully Blanchard for example have been used to perfection. You can read that post below.

WWE is holding back their superstars. AEW is letting them thrive.