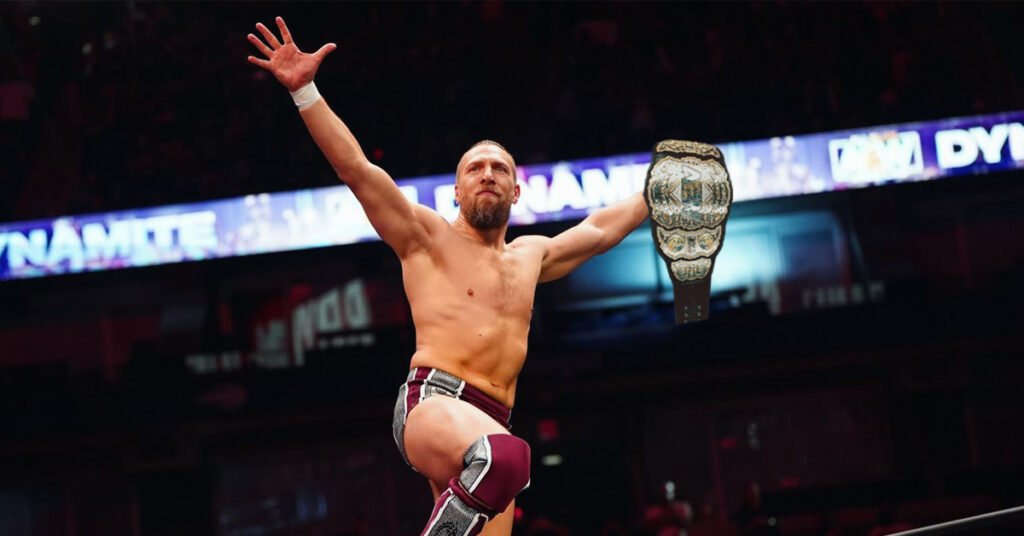 Bryan Danielson vs Kenny Omega was, for my money, the greatest AEW match of all time. For my money, it is a full five stars and nothing less. The pair wrestled like they had done it 1000 times before, and Bryan Danielson sold so well for Kenny Omega that I thought the match was going to be called off for injury. Words cannot adequately describe the greatness of this match, so I shan’t even try. But the performance from Danielson does beg the questions – Will we be seeing Bryan Danielson as AEW Champion at AEW Full Gear.

Now, I know what you’re thinking. I am thinking it too. Hangman Adam Page needs to beat Kenny Omega for the championship. His story has been the focal point of AEW since the companies inception. But have things evolved beyond the Hangman winning the title? Did he miss his shot, at the peak of his overness at AEW All Out, to win the AEW Championship. It is rumoured that he was set to become AEW Champion on September 5th, but has taken time off due to his partner expecting their first child.

It seems obvious that Page will win the AEW Champions. Or at least, it SEEMED obvious until AEW All Out, when some newcomers entered the AEW fray. Bryan Danielson and Adam Cole both made their debuts at the show, as well as CM Punk some weeks before on AEW Rampage. CM Punk’s return to wrestling was an expected surprise, marketed beautifully without really saying anything. Everybody knew he was coming but nobody knew for show, creating a level of anticipation not seen in years.

These additions to AEW strengthened the roster to being one of the best of all time. Jim Ross seems to think it has the potential, at least. The main event scene in AEW is one of the strongest in history. With the likes of Kenny Omega, Hangman Adam Page, Jon Moxley and Chris Jericho already main event stars, being joined by Malakai Black, CM Punk, Adam Cole and Bryan Danielson to name but a few, makes the different matchups almost unlimited.

For example, Cody Rhodes has never been in the ring with Jon Moxley, 2 years into AEW. Jericho and Omega haven’t wrestled since before AEW Dynamite was on the air. PAC hasn’t stepped foot in the ring with Chris Jericho since joining AEW. There are still so many fresh matchups to do, adding even more to the mix makes every show unpredictable and exciting.

With the influx of talent in AEW, and the incredible showing of Bryan Danielson vs Kenny Omega, it’s not hard to see a future where Hangman Adam Page does not defeat Kenny Omega for the AEW Championship. Page was the undisputed most popular man on the roster when he and the Dark Order fell to the Elite, in the 10 man tag match to decide if he would get a title shot. Page was attacked the next week by the Elite, and has not been seen on AEW since.

With the likes of Bryan Danielson and CM Punk coming in as top faces, it looks like the path toward the title is congested for Hangman Page. Danielson has surely shot to the top of the roster after his draw with Omega, and despite Omega’s protests on twitter, will surely earn his rematch for the championship. The match vs Omega was not just one of the best Bryan Danielson matches, but the best matches. In wrestling. Let that sink in.

If Danielson is facing Omega for the title, he needs to win. His star is so big that a loss like that would undermine him. Everyone knows he is the best wrestler in the world. He can beat literally anyone on his day. He almost beat Brock Lesnar for god sake. A loss would halt his momentum and frankly, Bryan Danielson will be the AEW Champion one day.

This could be at Full Gear. I want it to be Adam Page. I NEED it to be the Hangman. But does Bryan Danielson make more sense? He’s a bigger star, with a huge following and is one of the best, if not the best, wrestler in the world. I would be happy with Bryan Danielson as AEW Champion. Not before Hangman though. It has to be Hangman, but I will understand if Tony Khan thinks it is not.