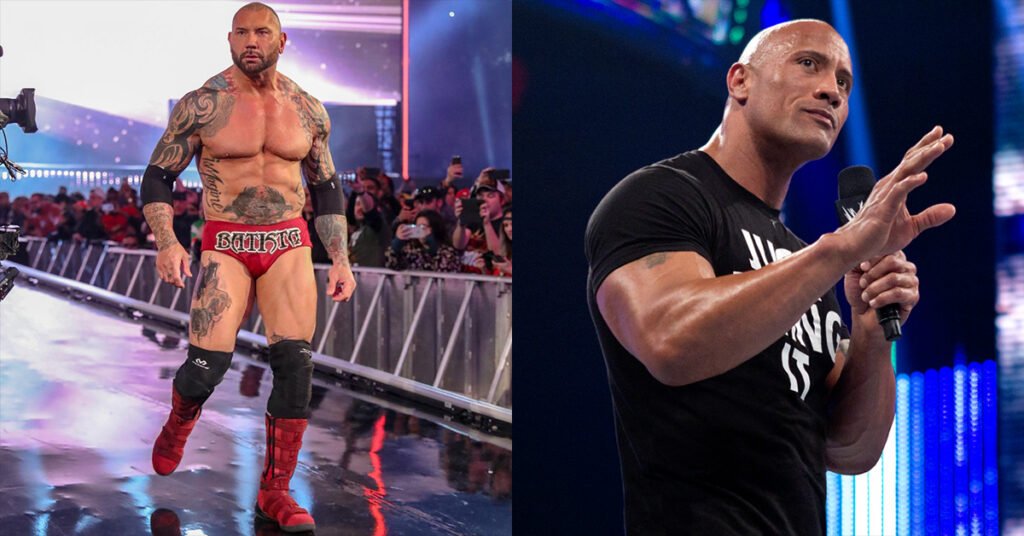 Batista vs The Rock is another dream match, like Sting vs Undertaker, that never happened. Would you liked to have seen that match?

One of the dream matches we never got to see one-on-one at Wrestlemania is Batista vs The Rock. The pair never clashed in singles matches on pay-per-view, and is one of the biggest missed opportunities in wrestling.

However, the Batista vs The Rock feud seems to be heating up, but this in Hollywood rather than WWE. The Rock has dominated the box office for nearly twenty years, whilst Batista has gone from strength to strength since his debut in 2014’s Guardians of the Galaxy.

However, Batista has recently called out The Rock’s (real name Dwayne Johnson) acting style as well as the roles he partakes in he. He claimed that The Rock was bigger and brasher than Batista – understandable for The Most Electrifying Man in Sports Entertainment – and said “I don’t want to be that guy”.

In a recent interview with JoBlo before the release of his Netflix Original move Army of the Dead, Batista stoked the fires of the Batista vs The Rock rivalry, although he later claimed that he meant to disrespect to the former WWE Champion.

Batista was asked a question about how his experience in telling a story through his movement’s in the ring with wrestling translated into his experience acting on the big screen. However, Batista wanted to distance himself from that kind of action, casting shade on The Rock for his “professional wrestling” persona in his movies.

“No, because I’ve tried to go the other route. Like, The Rock is a perfect example of someone who uses that strength, so I wanted to go against that grain and make everything much smaller, very subtle. I make a living off of subtlety. I want that to be my strength. I want that to be what separates us. I don’t want to be that guy who walks in that room, I never wanted to be that guy.”

This answer came across as combative and disrespectful toward The Rock. However Batista then clarified when pressed this perceived dig at The Great One. He said it was not a dig, but then went on to say The Rock is “Very professional wrestling” and not the kind of actor Batista wants to be known as.

“No, I don’t mean that as a dig on him, but you know how he is as a character. He feels very professional wrestling to me. I don’t want to be that guy. I want to be an actor. I want to act, I want people to judge me for my acting, my subtlety.”

Whilst Batista tried to clarify his statement, it still came across as he was disrespecting The Rock’s style of acting. However, I’m sure that he simply meant that The Rock was just a different style which he personally didn’t ascribe to, and that there is no Batista vs The Rock beef.

However, the pair did wrestle in WWE, but never got the Batista vs The Rock main event at Wrestlemania that the fans would have wanted to see.

Batista vs The Rock

WWE never pulled the trigger on a Batista vs The Rock match. The two Hollywood stars never truly had the timing right for a huge Wrestlemania singles match, but did clash at one Wrestlemania.

At Wrestlemania XX, Batista and his Evolution team mates Randy Orton and Ric Flair took on The Rock and Mick Foley in a 3-on-2 handicap match. The match was a disappointment, as none of the men truly thought they had the great match they could have.

Evolution picked up the win over The Rock & Sock Connection at Wrestlemania XX after Randy Orton hit Mick Foley with the RKO for the win. It was the last Evolution match at Wrestlemania, as the next year the team imploded when Batista beat Triple H for the World Heavyweight Championship.

This was also the last match of The Rock’s last run as a full-time WWE wrestler. He would soon make his way to Hollywood, and over the next few years make his name as one of, if not the, biggest film star the world over.

The Batista vs Rock single match never transpired unfortunately. By the time The Rock returned in 2011, Batista was long gone from the company and was trying his hand at acting. The Rock had matches against John Cena, CM Punk and R-Truth & The Miz, but never got to face The Animal in one on one competition.

The plan for WWE was never to book Batista vs The Rock. They simply passed like two ships in the night, nobody knowing just how huge these men would get. Now both Batista and The Rock are known across the world, and WWE are ruing that they never pulled the trigger on the blockbuster match.

Who would have won in Batista vs The Rock? Comment below or click Next Article to read more.