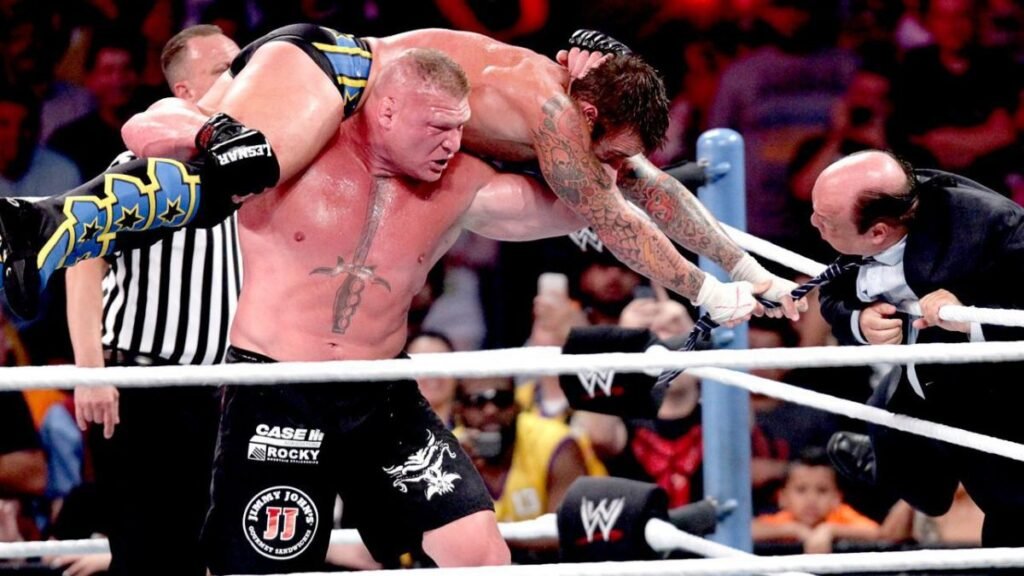 What is your favourite Brock Lesnar Wrestlemania match?

When you look at a wrestlers matches at one event’s history, a few stars come to mind. Shawn Michaels is “Mr Wrestlemania” due to his knack for pulling out incredible performance year after year at WWE’s biggest show of the year. We all know that Smackdown is The Rock’s show, but I think that Summerslam can be considered the domain of the Beast Incarnate Brock Lesnar.

It may surprise you at first think of Brock Lesnar’s Summerslam matches as being as incredible as they are. Over the fast few years in WWE he has drawn the ire of the fans for his perceived laziness in the ring and only caring about one thing – money. Even more infuriating, fans have seen glimmers of the old Brock Lesnar when he is motivated against performers like AJ Styles and Daniel Bryan, but those are few and far between.

Brock Lesnar’s first Summerslam match was in his rookie year in WWE. Brock Lesnar vs The Rock main evented Summerslam 2002 after Lesnar won the King of the Ring tournament to earn a shot at the WWE Undisputed Championship. It was a meteoric rise for the Best, as Brock Lesnar debut in WWE was only a few months prior, on the Raw after Wrestlemania X8.

The match was fantastic and saw Brock Lesnar beat The Rock to win the first of his 10 World Championships in WWE. It marked the end of The Rock’s run as a full-time wrestler but created a top star in WWE overnight. This was the start of Brock Lesnar’s Summerslam streak and is definitely a match to go back and watch.

His next Summerslam appearance came against one of his greatest rivals in the Olympic Gold Medallist Kurt Angle. The pair battled for the WWE Championship in a rematch of the Wrestlemania XIX main event between the pair. In 21 minutes, Kurt Angle defeated Lesnar by submission in the match of the night. Brock Lesnar was now the top star in WWE and was slowing earning the nickname of “Mr Summerslam”

This was his final appearance at the Biggest Party of the Summer until 2012. Lesnar left WWE in 2004 after a disastrous match with Goldberg at Wrestlemania XX. He would move on to play in the NFL, wrestle in Japan and fight in the UFC. He became a huge draw and a bigger name than he ever would have in WWE, and returned to a huge fanfare to face John Cena in 2012.

After his return in 2012, Brock Lesnar immediately got off the a poor start as he lost to John Cena at Extreme Rules 2012. Not deterred by shoddy booking, he booked his ticket to Summerslam 2012 as Brock Lesnar took on Triple H in a huge matchup. It was the first in a brilliant trilogy between the two, which lasted all the way the Wrestlemania the next year and the following pay per view.

Triple H fell to Brock Lesnar in a brutal match that showcased the absolute brutality of Brock Lesnar post return. Lesnar won the match after locking Triple H in the Kimura Lock, breaking the arm of The Game and cementing himself as a top heel in WWE.

Summerslam 2013 was Brock Lesnar’s greatest match ever, in my humble opinion. A grudge match against CM Punk was the semi-main event of the show, with the battle over Paul Heyman being the story of the match. CM Punk wanted to get his hands on Heyman after he betrayed him earlier in the year, while Heyman hid behind Brock Lesnar, goading Punk.

CM Punk vs Brock Lesnar had one of the most compelling builds to a story in years, only matched by the story told in the ring. CM Punk flew out of the blocks and took control of the match, and made fans believe that he could defeat Lesnar. He outsmarted the former WWE Champion and almost had him beaten at multiple point, although Heyman’s interference eventually led to Lesnar getting the win over CM Punk.

In 20 minutes of absolute destruction, Brock Lesnar suplexed John Cena around the ring without answer. It was utter destruction that fans had never seen suffered by John Cena before. It was one sided as Brock Lesnar vs a jobber in the beginning of his career and it ended up making Lesnar’s Streak breaking antics even more breath-taking.

Even though he lost the match, Brock Lesnar’s streak of Summerslam matches continued. However, the next year would be a low point in the Brock Lesnar Summerslam Saga and would have the entire wrestling world questioning the end of the match.

Brock Lesnar vs Randy Orton was the headline match from Summerslam 2016. It was a dream match for many and a match that we had not seen since both men had been in the infancy of their storied careers. Fans had long theorised seeing the legendary F5 being reversed out of nowhere by Randy Orton’s RKO. Alas, we never saw the iconic reversal, but we did see something much, much worse.

At the end of the match, Brock Lesnar took down Orton with a barrage of elbows to head. As he sunk his elbows in the skull of Orton, blood began to pour from the head of Viper. After some time had passed, the referee stepped in and forced the match to stop, as blood covered the ring and Orton’s glassy eyes and dazed expression confirmed the worse – concussion.

It was a horrible end to a match that did not live up to the hype. However, even Shawn Michaels had a bad match or two at Wrestlemania, so Brock Lesnar’s Summerslam credentials did not die with Randy Orton there.

In recent years, Brock Lesnar’s Summerslam matches haven’t reached the heights of his early ones. He’s not had an incredible performance like against CM Punk or had a huge shock like the John Cena match in years, but that does not mean he’s had bad matches.

Maybe he could be the one to help Brock Lesnar reclaim Summerslam and get back on top of the world.

What is the best Brock Lesnar Summerslam match? Let us know in the comments or click below to read more