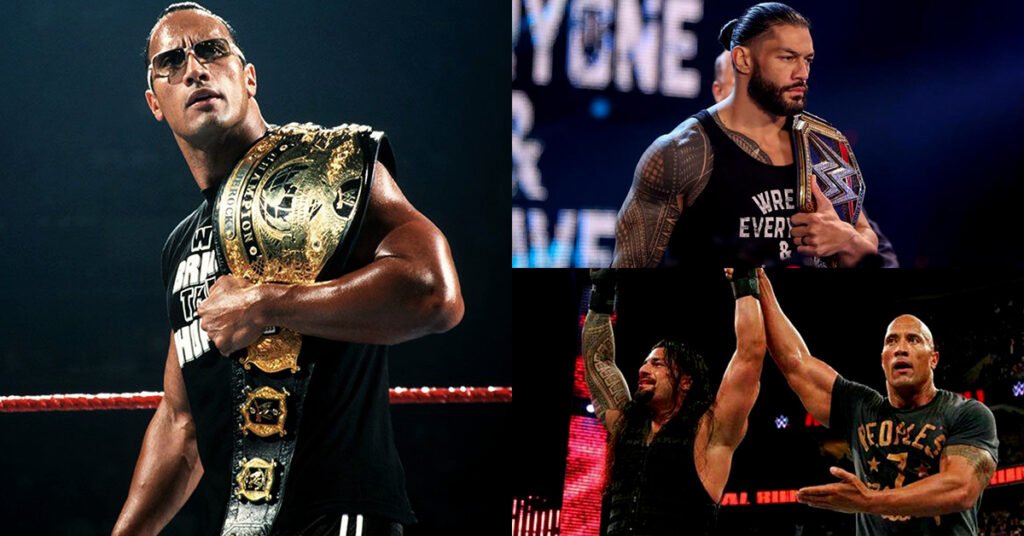 The Rock vs Roman Reigns has long been heralded as a future Wrestlemania Main event. If the Rock’s schedule allows, the two will surely go toe-to-toe at the grandest stage of them all, Wrestlemania. But can Roman Reigns beat the Rock? Does the Big Dog have what it takes to beat the Great One?

The Rock is one of the greatest wrestlers of all time. He gained immense popularity during the Attitude Era, the most popular time in WWE history. They became a huge name worldwide in this time, with the likes of Steve Austin, The Rock and The Undertaker propelling them to the top of the Sports Entertainment world.

The Rock started out as a bland, boring babyface named “Rocky Maivia”, a tribute to his father Rocky Johnson and his Grandfather “High Chief” Peter Maivia. However, the fans soon turned on Rocky, famously chanting “Die Rocky Die” at the young star.

This facilitated his turn to heel and his new persona, The Rock. The third-person referring, trash talking Rock took the wrestling world by storm, winning multiple WWE Championships and carving out a hall of fame career in just six short years. He excelled not just in the ring, but on the microphone with his smack talking and multiple catchphrases become one of the best parts of the show.

He even had a show named after one of his catchphrases. “Smackdown” was the Rock’s show, named after the Great One. If that doesn’t show the Rock’s immense popularity, then I don’t know what does.

Roman Reigns’ rise to the top was different, but bore some similarities to that of his cousin, The Rock. He came in to WWE as a rookie, just as the Rock had. After a short stint in developmental, he debuted at Survivor Series 2012 alongside Seth Rollins and Dean Ambrose (Jon Moxley) as part of The Shield.

The Shield dominated the entire WWE for nearly two years. They won tag team title and United States title gold, and ran roughshod over any superstar that came in their way. With Roman Reigns as the muscle of the group, all three men were catapulted into main event status almost overnight.

After almost two years in the main event with the trio, Seth Rollins turned on the group and split up the Shield. This where things started to go downhill for Roman Reigns. WWE decided to push him as the main event face of the company, despite fans desperate for others such as Daniel Bryan and Dolph Ziggler to take his place at the top of the mountain.

This came to a head at the 2015 Royal Rumble. Daniel Bryan had just returned from a year long injury, after relinquishing his WWE Championship he won at Wrestlemania 30 due to neck injuries. Fans were adamant that they wanted to see Bryan win the Royal Rumble and take back the title he never lost, and were acutely aware that Reigns, who was now starting to get boos, was the man the WWE wanted to main event Wrestlemania instead.

So, WWE did what literally no-one thought they should do. They had Bryan eliminated early, and had Roman Reigns go all the way to win the Royal Rumble. Fans booed him out of the building like I’ve never seen before, and even interference from the Rock himself couldn’t stop Roman Reigns from being booed.

It would take a few years of boos, and one hiatus due to cancer treatment, for WWE to finally see the light and turn Roman Reigns heel. He adopted his current Tribal Chief character and won the Universal Championship from The Fiend and became the top heel in WWE.

Since that day in September 2020, he has held that championship and dominated all comers on Smackdown. He has finally been allowed to be the heel that fans were begging to boo, and is simply waiting for his matchup against his cousin, The Rock, to cap off a legendary title reign.

Can Roman Reigns beat the Rock?

But, when the two do set foot in the ring, who will win? Can Roman Reigns defeat the Rock?

What we should really be asking is, should this match even take place? The Rock is now full time in Hollywood, and has been for many years. He has only had a handful of matches since he left WWE in 2004, against the likes of John Cena, CM Punk and The Miz. He last match, if you can call it that, was a 5 second squash against Erick Rowan at Wrestlemania 32 which really did not count as a match at all.

The Rock has already confirmed that next years Wrestlemania will not be where he faces Roman Reigns. The former WWE Champion has a full schedule already in Hollywood, and is looking to avoid a disastrous injury again, like when he faced John Cena and tore his muscle so badly they had to postpone production of Hercules.

This would mean that The Rock would be at least 50 years old by the time this match would happen. While he has never been the most technical wrestler, we saw how his mobility and speed had been limited in 2012 against John Cena due to his age and size. 10 years later and even heavier (The Rock is ridiculous jacked), the match was likely have to be carried by Roman Reigns, who himself isn’t a technical wizard in the ring.

Plus, while it may be a huge match, why do they need to do it? Roman Reigns has beaten everyone in WWE already. There’s nobody left who can realistically beat him for the championship. Except for the Demon of course, but he fell of the rope and lost for some reason.

Will the Rock return to WWE?

The Rock isn’t going to come back to win the World Championship again. He is the biggest actor in the world and is constantly making movies. He cannot take the time to defend his championship or appear on WWE TV, should he win the belt at Wrestlemania from Roman Reigns.

Plus having Roman Reigns beat the Rock will do literally nothing for everyone. While some may call it a “dream match” (as not a Roman fan, I have no interest in this match at all), Roman beating the Rock doesn’t do anything to make him more of a star. He’s already beaten everyone in the WWE, beating a basically retired 50 year old the Rock, while entertaining, doesn’t make him more impressive.

It would be better off if the pair fought in a non-title match should Roman drop the title, or if the Rock is adamant that he needs to wrestle, find him a different partner in the ring. The Rock against someone more impressive in the ring like Seth Rollins or AJ Styles would produce a vastly different match and would propel those men onto Roman Reigns level should they defeat the Brahma Bull.

Of course Roman Reigns can beat the Rock. He has been a dominant champion for two years and nobody (except Kevin Owens who was screwed by the referees) has come close to dethroning the Big Dog. Roman Reigns would wipe the floor with The Rock, as he did to both Edge and Daniel Bryan at the last Wrestlemania.

But the match is pointless. And in all likelihood, the Rock won’t even do it. WWE can’t afford the kind of money he gets paid by the likes of Netflix for his fun, formulaic action movies like Red Notice. Of course I’d love to see the Rock back in WWE, but one match against Roman Reigns? Just leave the memories alone and watch him on the WWE network.