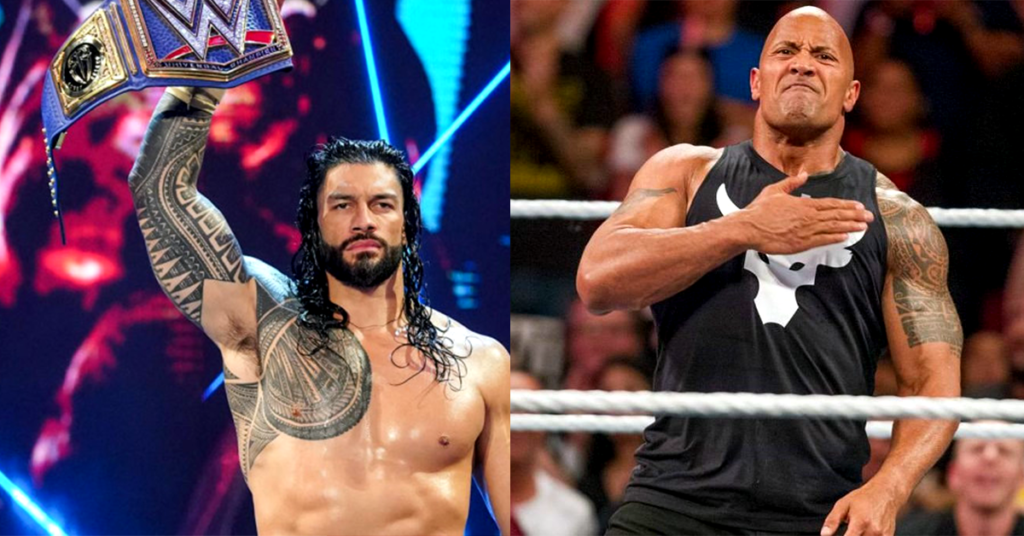 With Roman Reigns set to take on The Rock in the Main Event of Wrestlemania, we take a look at state of WWE’s main event scene, and how their failure to build new stars will cost them dearly in the years to come.

WWE likes to boast about the stars they have produced. Michael Cole announced Becky Lynch as “One of the biggest stars on the planet” in a way that was so disingenuous it was almost insulting.

John Cena, the poster boy of WWE is now making waves in Hollywood, and is touted as WWE’s biggest star. But John Cena is never there.

Brock Lesnar broke the Undertaker’s Wrestlemania Streak, and dominated WWE for the best part of a decade now. But he’s never there, and hasn’t wrestled on TV in years.

The Rock vs Roman Reigns is reported to be the main event of Wrestlemania next year. But the Rock hasn’t been full time in WWE for 18 years.

CM Punk is the last man to really make waves in WWE that would have the fans clamouring for a return. Even the legendary Daniel Bryan, who the company tried their best NOT to make him the top guy in the company, rose above the corporate bullshit and even he has left.

WWE has made no new megastars since the days of Rock and Austin, with few exceptions like Cena and Punk sprinkled in. The future is bleak when the lights go out on these legends and they can longer go in the ring.

John Cena made his long awaited return to WWE to face Roman Reigns at Summerslam. In the biggest match on the card, in the most watch Summerslam ever, Roman Reigns defeated John Cena to retain his Universal Championship. Reigns has held the Championship since August 2020, and there are no signs of stopping despite the reintroduction of Brock Lesnar as his next opponent.

The Samoan Star is one of the biggest stars in WWE at the moment, and has run through all that have dared challenge. Reigns has defeated the likes of Kevin Owens, Daniel Bryan and Royal Rumble Winner Edge to keep hold of his precious World Championship. With Paul Heyman on his side, Reigns looks to carry on his reign of terror, which is one of the most dominant reigns in WWE history.

Brock Lesnar is the man who looks to be challenging the “Tribal Chief” next. Lesnar returned to WWE at the end of Summerslam last week, sporting a new look complete with, and I can’t stress this enough, disturbingly terrible haircut. The man looks like an onion. I’m sure when he gets in the ring with Reigns, he’ll look like a red onion.

Ignoring Brock’s barbers failure in his job, Lesnar will be next in line to challenger Roman Reigns for the Universal Championship. After three reigns already with the horrible blue belt, Lesnar will look to win the title for a fourth time, which is more than matches than he’s had since 2020 (3).

Brock Lesnar and Roman Reigns have been eternal enemies in WWE since Reigns won the 2015 Royal Rumble. Lesnar, then the WWE Champion, defended his championship against Reigns at WrestleMania 31.The build up to the match was as comical and as it was awful.

The crowd was all for Brock and had such disdain for Roman, that they even booed The Rock when he came to help Reigns during the Royal Rumble. The Rock hasn’t been booed in about 20 years by wrestling fans, so to have that much go away heat is incredible. I can’t stress enough just how against Roman Reigns the fans were.

When he entered the arena for the Wrestlemania main event, the stadium was filled by the chorus of boos. The whole thing was summed up nicely by a single fan in the crowd holding up a sign, bearing five immortal words.

The event was saved when Seth Rollins. Reigns former Shield team member ran in and cashed in his Money in the Bank contract. Rollins pinned Reigns to win his first WWE Championship, as Roman’s family watched on in horror from the front row.

Seeing the awful reaction the pair had, you’d think maybe WWE would think twice about putting these two together again.

What’s that Vince? You think they should main event Wrestlemania, Summerslam and something called The Greatest Royal Rumble? I mean that sounds ridiculous, what even is that? No I don’t think that should happen, not even slightly.

Brock vs Lesnar – An Anthology

So anyway in 2018 Roman Reigns and Brock Lesnar main evented Wrestlemania, Summerslam and something called The Greatest Royal Rumble. None of the matches were regarded as good, and the Wrestlemania 34 match was particularly fucking embarassing.

Two years prior, Roman Reigns had beaten Triple H for the WWE Champion in Wrestlemania’s main event. The match featured possibly the most apathetic crowd in Wrestlemania history. After what felt like 12 hours of Wrestling, Reigns took on ‘The Game’. The match took place in front of a crowd who couldn’t give less of a shit. They were tired and barely reacted to anything, save from Roman Reigns delivering a spear to Triple H’s wife Stephanie.

After that encounter, you’d think it can’t possibly get worse. Well, strap yourselves in and prepare to be underwhelmed to the max.

Roman Reigns kicked out of five F5’s. FIVE. They had built up that year that it only took one F5 to put even the top superstars away. It only took three F5’s to end the Undertaker’s streak. Yet, when Reigns lifted his shoulder at two and half on the third F5, you’d except the crowd to erupt.

But they didn’t. There was barely a murmur. Because nobody wanted Reigns as champion, and nobody wanted Lesnar as champion. Beach balls and Randy Savage chants rang around the arena before anyone cared what happened in the match. The camera showed people leaving early, some in protest and some who just didn’t care.

That is because WWE doesn’t know how to book their stars. Roman Reigns wasn’t the man to dethrone Lesnar. WWE had ignored what the fans wanted and gone with their homegrown talent. Which could have worked had they known how to book a top face, which is clear that they don’t.

From the Shield split onwards, WWE had marketed Reigns as simultaneously the ultimate underdog, and the unstoppable force. They emphasised that he was the strongest, most impressive man on the roster. They were also screeching, via an impossibly annoying Michael Cole, that Reigns had no chance of winning his matches. Despite the parroting of how much he had no chance against the likes of Kane and the Big Show (every single fucking week it felt like), Reigns did not suffer a singles pinfall loss for years.

Since being defeated by Leo Kruger (Adam Rose) in FCW, Reigns first singles pinfall lost came at the hands of Seth Rollins at Money in the Bank 2016. This came 4 years after his debut, and the fans were sick and tired on the company telling them that Reigns was the underdog, despite never losing a match because he was the worst man in the match.

WWE’s inability to build top stars has meant that after The Rock, WWE has no stars to face Roman Reigns. Not only has he run through every top face in the company, WWE hasn’t built anyone up to the level of the returning legends he will face in years.

Once The Rock hangs up his boots for good (after the Reigns match most likely), Reigns will be the biggest star left in WWE. They have no one else left to bring back. Nobody who can main event a pay per view and draw in the millions of viewers.

Matches like Roman Reigns vs Drew Mcintyre and Roman Reigns vs Seth Rollins are main event matches. But they are not must see. WWE have put everything behind the Big Dog, and he still isn’t the must see star they want. And even if he was, he can’t wrestle himself.

They have failed in every aspect to build someone to bring in the fans to headline a Wrestlemania or a Summerslam.

After the Rock is gone and Brock hangs up his boots. Roman Reigns is all that’s left. They have not built up any other stars. Becky Lynch got over despite the company trying their best to fuck it up. Unfortunately, there are no women on her level either. The Rock vs Roman Reigns will be the last great Wrestlemania main event, because there is not any star power left in WWE. They spent too long relying on the stars of 20 years ago, and forgot that that was in the past. It’s not an impossible situation for WWE to book themselves out of, but watching their tv shows for the past few years, I highly doubt it.