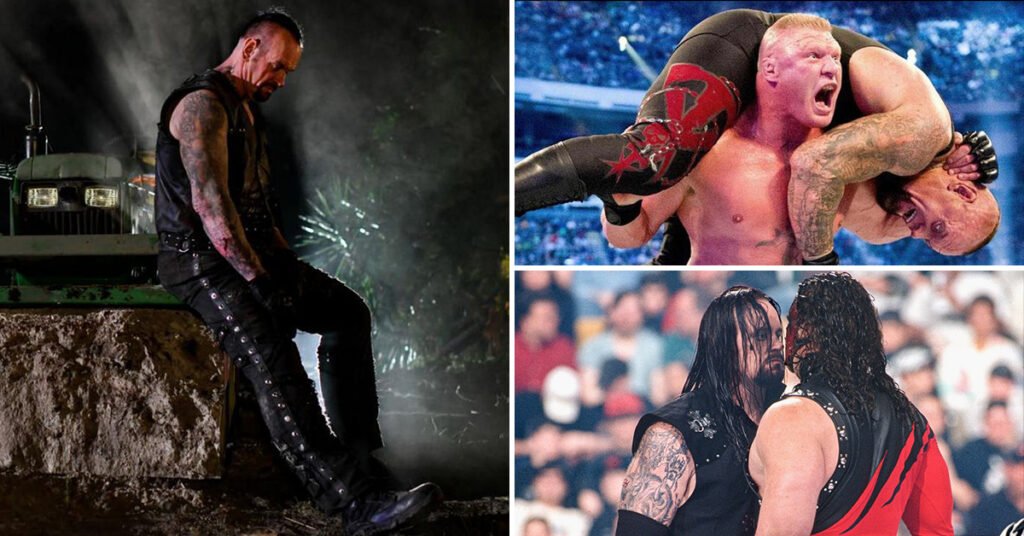 Want to find out the top 10 Undertaker best matches? Keep reading and see if your favourite makes the list!

The Undertaker is one of the greatest wrestlers of all time. He stood at the helm of WWE for over 30 years and proved to be the yard stick that all other WWE superstars were measured against. Most would agree that he is the greatest wrestler of all time and few can claim to match his talent, dedication and longevity in the wrestling business.

The Deadman official announced his retirement from wrestling in 2020 after his five-part documentary series on the WWE network “Undertaker: The Last Ride”. It closed the curtain on thirty years in WWE, and in that time The Undertaker had some of the greatest matches anyone has ever seen in wrestling.

Whether it be story driven epics, brutal hardcore bouts of demonic Hell in a Cell matches, the versatility of The Undertaker may be his greatest and most overlooked strength. Whether against small high flyers like AJ Styles and Rey Mysterio, or big men like Kane or Brock Lesnar, there’s no-one The Undertaker couldn’t have a great match with.

Keep reading to find out the Undertaker best matches in WWE history.

The first match on the list of the Undertaker best matches is his Hell in a Cell match against Brock Lesnar.

This is the first Hell in a Cell match on the list but by no means the last. The early 2000s were not a good time for the Deadman, with fans thinking he was old and past it. Injuries meant that he had been contemplating retirement at that time, and few fans would have imagined he would keep wrestling for a further 20 years, especially with his match quality decreasing.

This match could signal a turning of the tide where The Undertaker began to really impress in the ring. Their Hell in a Cell match was for Brock Lesnar’s WWE Championship and was a truly epic bout. It was a slow, psychological bloodbath. Undertaker, wearing a cast due to a broken hand, decimated Lesnar, who tried to rip the cast off to inflict even more damage to the Deadman.

Lesnar bumped all over the cage during the match. He was sent flying multiple times by Undertaker, and was the first time in his career that he truly showed fear inside the ring. Lesnar retained his championship in the fantastic match that was a star-making performance for “The Next Big Thing”.

One of the best storylines of 2007-2008 was Undertaker’s battles with Edge. Edge cashed in the Money in the Bank on Undertaker in 2007 to steal his World Heavyweight Championship and the pair would scrap over the belt for the better part of a year.

Aided by Vickie Guerrero, Chavo Guerrero, Bam Neely and The Edge Heads (Zack Ryder and Curt Hawkins) Edge made the Undertaker’s life a living hell. He had his on-screen wife ban Undertaker’s moves, fire him from his job and generally make the fans cheer the Undertaker and boo Edge more than ever.

The pair batted many times including singles matches, ladder matches and Hell in a Cell matches. However, their Wrestlemania 24 match was a classic straight one-on-one match between two men defending their own Wrestlemania streaks.

Despite interference, the Undertaker stood tall at the end of the Wrestlemania 24 main event and won the World Heavyweight Championship from the Rated-R Superstar Edge, in one of the Deadman’s greatest ever matches.

This match also made it’s way onto the list of the best Edge matches in WWE, as well as the Undertaker best matches

CM Punk had a chip on his shoulder coming into this match and it showed. He worked this match at 100 miles per hour, not letting the Deadman breath as he dominated the man twice his size. Angry at missing out on the Wrestlemania 29 main event, CM Punk made it his mission to drag the Undertaker to a match of the year candidate that showed Vince who really should have been the main event.

The Hell in a Cell battle from King of the Ring 1996 almost killed Mick Foley multiple times. The Undertaker through Mankind from the top of the cell through the announce table, then later chokeslammed him through the cell roof, with Mankind almost landing on his neck. His tooth went through his nose and fans around the world were sure they’d seen a man die.

The Undertaker defeated Triple H the year prior, but the Game took him to his very limit. The Deadman limped to the back, having given his all and barely survived. This meant that a rematch was needed, with the Game’s confidence at an all time high. That all dropped when the stipulation was announced as Hell in a Cell. However, he had an ace in his pocket – his best friend Shawn Michaels was the special guest recipe.

In the end of an era match, the Undertaker survived everything the Game could throw at him to extend his Streak to 19-0 at Wrestlemania. Everyone thought he was beaten when he was nailed by a Sweet Chin Music-Pedigree combination, but the Undertaker summoned up all his might to kick out and go on to put Triple H away for good.

Edge and Undertaker’s feud ended finally at Summerslam 2008. Vickie Guerrero who has previously fired Undertaker brought him back when she caught Edge cheating on her. As revenge she put Edge vs Undertaker inside the Hell in the Cell, where the Undertaker won back the World Heavyweight championship

The match that should have main evented Wrestlemania 22 is Undertaker vs Kurt Angle. The pair battled at No Way Out with the Undertaker aiming to win his first ever World Heavyweight Championship in WWE. Angle was arguably at his peak, putting on incredible matches night in night out.

Undertaker would go on to face Mark Henry at that years Wrestlemania in one of the worst streak matches ever. Angle lost his Championship to Rey Mysterio in a match involving Randy Orton, but both have expressed that Angle vs Undertaker should have been the Wrestlemania match. This match was one of the matches of the year and showcased both men at their peak of in-ring ability.

If you don’t like Shawn Michaels vs The Undertaker then the last three matches are not for you. It’s undeniable that HBK was Undertaker’s best opponent, with the pair always pulling the best performances out of each other. Battles over the WWF Championship, personal pride and their own careers were just some of the reason two of the greats set foot inside the ring against each other again and again and again, to the viewers delight.

This match at Badd Blood was the first ever Hell in a Cell match. The feud between the pair had reached a fever pitch and could only be finished in the most violent match possible – The Hell in a Cell. The pair completely blew everyone’s expectations out of the water, and earned the coveted five star match rating from Dave Meltzer. It also featured the incredible debut of Kane, who tore the cell door off it’s hinges to attack his brother the Undertaker, handing HBK the win.

The second of two Wrestlemania classic between these two men is the second best Undertaker match ever. With his determination to face the Deadman one more time with the chance to end the streak, Shawn Michaels put his illustrious career on the line with the match with the greatest stakes in WWE history.

The match saw the end of Michaels career, as the Undertaker did to him just what he did to Ric Flair two years prior. Defiant to the end, the Undertaker put away the Heart Break Kid with a brutal jumping Tombstone Piledriver to bookend a remarkable career with one of the moist incredible matches in WWE history.

The match had little build and little stakes on offer. Of course the streak was on the line but that was a given. Shawn Michaels would put his career on the line the next year but this time was simply a battle between two individuals with a storied past.

The match delivered way past anyone’s expectations. Two of the greatest of all time wrestled the perfect match that shocked everyone in the building. Multiple times they leapt on their feet as they thought Shawn Michaels would end the streak. However, a moonsault reversed into a Tombstone Piledriver was all she wrote for the Heart Break Kid, who lost to extend the Undertaker’s undefeated streak.

So that was our list of the Undertaker best matches in WWE. What do you think ranks as his best match and what didn’t make it to our list?