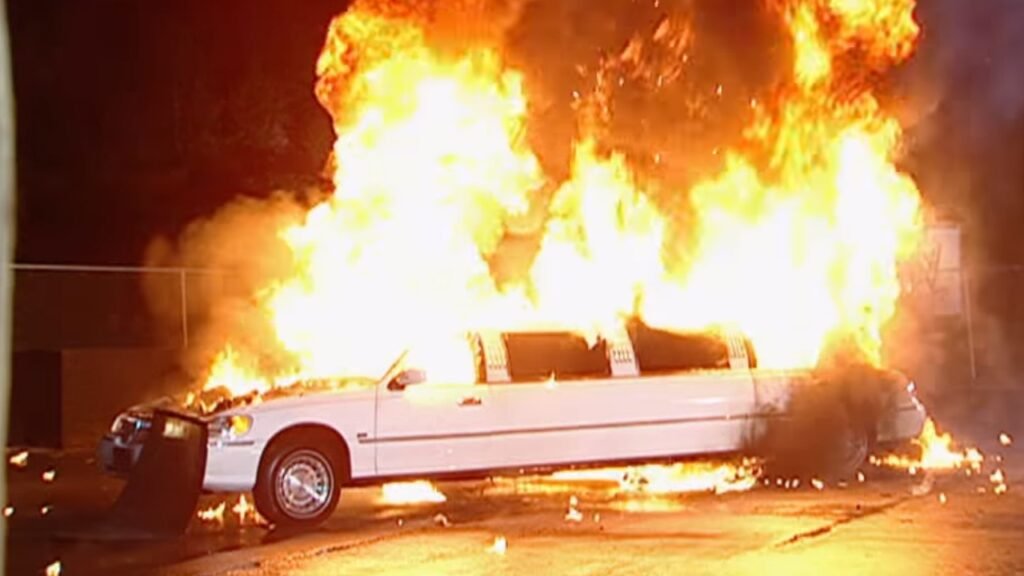 Vince McMahon‘s funeral was set to take place on an episode of Monday Night Raw on June 25th, 2007. The venue was meant to be in Corpus Christi, Texas, and would feature the first ever televised appearance of his estranged brother, Rod McMahon.

Vince McMahon had been killed the week prior on WWE television, with his limo exploding as he left the building following that weeks episode of Raw. The death was going to be one of the hottest angles on WWE TV in years, with the death meant have paid off with Mr Kennedy taking over the company and becoming WWE Champion, feuding with Triple H.

However, that weekend something took a turn for the worst. Instead of televising Vince McMahon’s funeral, he appeared on WWE Raw to announce that he was not dead, breaking the fourth wall to reveal it was simply an on-screen storyline. Instead, he announced the untimely deaths of Chris Benoit, his wife Nancy (Woman in WCW & ECW) and their son, Daniel.

McMahon announced that the episode would be dedicated to Chris Benoit, although it later came out that it was Benoit would murdered his family, and his name was never spoken on television again.

The Funeral of Vince McMahon was set to be one of WWE’s biggest storylines of 2007. His death shocked the wrestling world, and everyone was on tenterhooks to see what would happen next.

Vince McMahon’s funeral would have kicked off a huge year-long storyline, culminating in Mr Kennedy vs Triple H at Wrestlemania 24. Kennedy was meant to be named as Vince McMahon’s illegitimate son, an accolade given to Hornswoggle after Chris Benoit’s death.

According to Figure Four Weekly, the angle was to take inspiration from the “Who shot JR?” storyline from the TV Show Dallas. WWE would explore who killed Vince McMahon and would be as much of a whodunnit show than a wrestling show.

The entire McMahon family was set to get involved, including the lesser-spotted brother of Vince, Rod McMahon. Rod has never been seen on WWE TV and would have been a huge surprise. Sadly, Rod McMahon passed away last year, never getting the chance to appear at Vince McMahon’s funeral.

Vince McMahon looked set to take his inspiration from Eastenders’ Ian Beale, by growing his hair, beard and fingernails out, like Ian Beale did when he was homeless.

Mr Kennedy would inherit the company and run the WWE as a benevolent dictator. The former Mr Money in the Bank winner would use his new-found power to book himself as a top star in WWE, including winning the WWE Championship from the champion at the time, likely John Cena or Triple H.

The feud would lead to Wrestlemania 24, where Mr Kennedy would battle to keep his company and his championship belt, as the top heel in the company. Sources on what the match would be would vary, with some saying that Triple H would face Mr Kennedy, whilst others say that Shane McMahon would wrestle him for control of the company on behalf of his sister Stephanie McMahon.

What role, if any, Chris Benoit would have on the storyline is unknown. He was due to win the ECW Championship before his death, so it is likely he would be wrestling the likes of CM Punk, John Morrison and Tommy Dreamer rather than fighting Mr Kennedy.

However, Vince McMahon’s funeral episode of Raw was cancelled, as the body of Chris Benoit was found that morning. The episode was announced as a tribute to the former World Heavyweight Champion, with McMahon returning to television and stating that his death was in character and he would not be continuing the angle for the foreseeable future.

It later came out that Benoit had murdered his wife and son, making the tribute episode quite the blunder for WWE. WWE Superstars recorded video tributes for the man to be shown during the show, but some, like William Regal, were reserved in the comments, implying they knew what was likely to come out about Chris Benoit’s death.

Chris Benoit’s death was a tragedy, and it deprived WWE of one of it’s most creative storylines in years. Vince McMahon’s funeral would have been the catalyst to the push of Mr Kennedy as a top heel in WWE, but sadly we never got to see that in WWE.

Would you have liked to see Vince McMahon’s funeral on RAW? Let us know in the comments or click below to read more