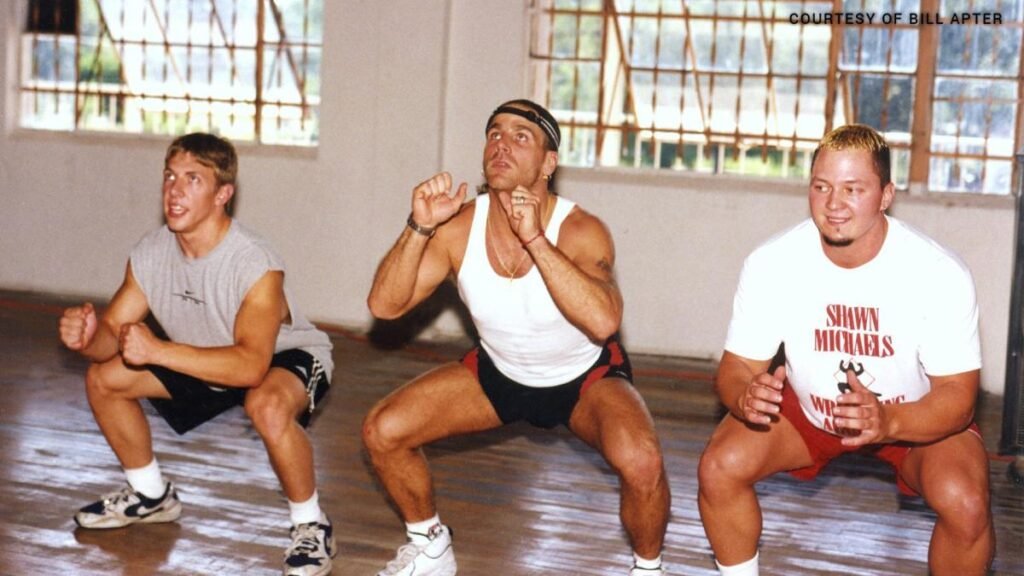 After the first of Shawn Michael’s three retirements, the Heart Break Kid spent his free time setting up his own wrestling school in his hometown of San Antonio, Texas.

Other trainers at the academy included Ken Johnson, Jose Lothario and Rudy Boy Gonzalez, who along with Shawn Michaels trained a host of aspiring wrestlers who some of which would go on to become huge stars in the business.

Shawn Michaels returned to the ring in 2002 and re-joined WWE. It was the last of his days training up-and-coming hopefuls, and the academy soon dropped him from their name entirely. He would later go on to become the head booker in NXT, but did not do the day-to-day training of rookies in the ring in the performance centre.

Cade was immediately spotted by Shawn Michaels as a potential star for the future. He was an 18 year old kid who stood at 6 foot 5 and had the look at Vince McMahon looked for in a top star. Daniel Bryan talked about Lance Cade in his book and how he caught the eye of HBK as soon as he started training under Shawn Michaels.

“Lance caught Shawn’s eye from the very beginning. He was a big guy from Nebraska—tall (six foot five), muscular, and athletic. He was good-looking, too, with his long blond hair, and only eighteen at the time.“

“That first day of training, among all the calisthenics and rolls, we also did something involving jumping. Lance could jump to the moon, and when Shawn saw him jump so high, he immediately said—in front of everyone—“I smell money.” It was clear that Lance was one of Shawn’s early favorites.“

Lance Cade did not become a WWE Champion as some might have expected early on, but did find success in the tag team division in WWE. Alongside partner and former NWA World Heavyweight Champion Trevor Murdoch, he won the World Tag Team Championships. He was later paired with JBL against his teacher Shawn Michaels before he was released by WWE in 2008.

Sadly, Lance Cade passed away in 2010 aged just 29. He died of heart failure, caused by a “mixed drug intoxication, complicating a cardiomyopathy“.

Another wrestler among the first group of wrestlers trained by Shawn Michaels is Brian Kendrick, also known as Spanky.

Kendrick was among Lance Cade and other WWE superstars who were the first to be trained by HBK, and travelled from from Washington to Texas in order to learn the art of wrestling from the former WWE Champion.

Brian Kendrick would turn out to become a top class tag team wrestler. He and Paul London would hold the record as the longest reigning WWE Tag Team Champions on Smackdown, and he would later find success as a singles competitor under the gimmick of The Brian Kendrick.

He was recently signed by AEW, but let go almost immediately due to videos of him spouting offensive and disgusting conspiracy theories came to light. He has so far not been rehired by WWE nor AEW as of the time of writing.

Brian Kendrick’s most famous tag team partner Paul London was also a trainee of Shawn Michaels. London was part of a different class of wrestlers to the likes of Kendrick and Cade, but nonetheless was a graduate of the Shawn Michaels Wrestling Academy.

London enrolled in the academy in 2001 after making his debut in wrestling the year prior. He supplemented his training with the extra learning under the Heart Break Kids wrestling school which helped him develop into the great high flyer that he became.

Paul London became a star in ROH early on his career which earned him a chance to wrestle in the WWE. He took that chance and formed an incredible partnership with fellow TWA alumni Brian Kendrick. The pair, known as London & Kendrick captured the WWE Tag Team Championships and were one of the most exciting tag teams of the mid 2000s in WWE.

He was released in 2008 and never made another WWE appearance. He went on to appear in TNA and ROH in his career, and still wrestles to this day.

Former TNA and LAX star Hernandez is one of the men who trained in the Shawn Michaels Wrestling Academy. Hernandez trained at TWA after his Arena Football career ended and joined after making his debut in 1996.

After a brief spell as a jobber in the WWF, Hernandez made his name in TNA, both as a singles star and as part of the Latin American X-Change or LAX. He won the TNA Tag Team Championships five times, and eight tag team championships over all.

His most recent run with the company ended in January 2022 and he is currently not signed to any wrestling company in particular.

Also known in WWE as Daniel Bryan, Bryan Danielson was trained by Shawn Michaels in the TWA at the start of his career in 1999.

Danielson joined Michaels’ wrestling school after trying to get trained by Dean Malenko. However after paying his fees to Malenko’s school, it promptly shut down and Danielson never recovered the few hundred dollars he paid to learn at the school.

Whilst many people think William Regal trained Bryan Danielson, it was actually Shawn Michaels. Danielson described him as a “passionate” teacher and a “coach I respected” in his book,

“Shawn’s passion for wrestling was apparent as well, and seeing it humanized him for me. Gradually, he turned from being a Superstar I was in awe of to a coach I respected (admittedly, with a little bit of awe).

“Shawn was so passionate that occasionally he would get in the ring and actually take the moves, even though he wasn’t supposed to because of his back. One time we were learning back body drops, one of the higher bumps in wrestling, and none of us were taking them very well. We might have landed fine, but we weren’t getting the height to make the move look spectacular.”

Danielson would graduate from Shawn Michaels’ wrestling academy and go onto become a huge star in the world of wrestling. He main evented Wrestlemania’s, won World Championships, became one of the greatest technical wrestlers of all time and then moved to AEW to have some fun putting on some incredible matches against the best in the world.

Is William Regal vs Bryan Danielson set for AEW?