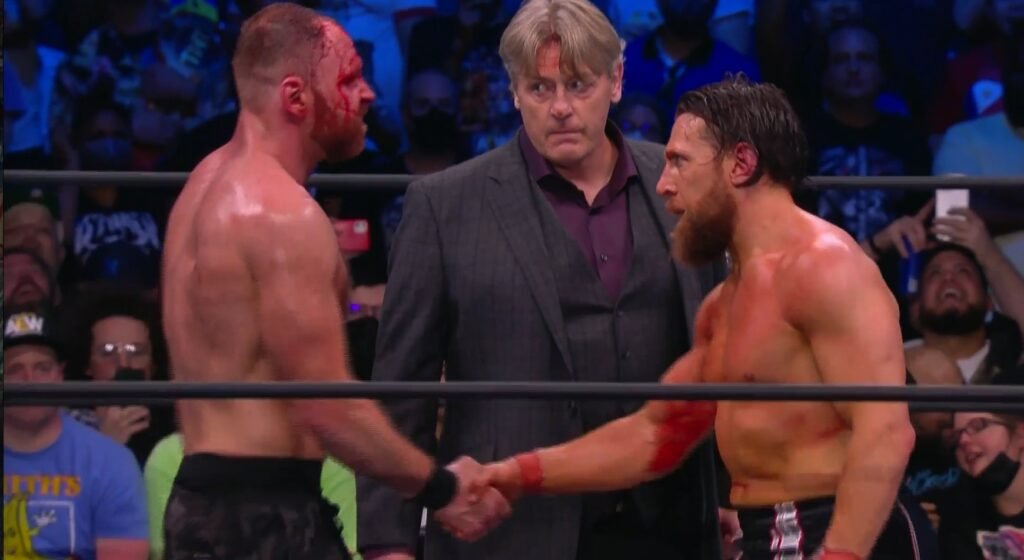 William Regal joined Bryan Danielson and Jon Moxley in the ring at AEW Revolution, marking his debut appearance for the company. As the pair fought and being bloodied and bruised during their match at the event, William Regal ran from the break to break up the fight and give the pair a slap of his own.

Whilst Regal has not competed in the ring since the William Regal vs Cesaro match in NXT in 2013, could we be gearing up for one final match for the veteran Englishman, against his own protegee with William Regal vs Bryan Danielson in AEW?

William Regal vs Bryan Danielson has taken place in the past, although it took place in WWE where Danielson went by the name Daniel Bryan. The most famous match of theirs took place on an episode of WWE superstars in 2011, just as the long storied career of William Regal was winding down.

The show was broadcast from Liverpool in England, the home country of William Regal. The British fans popped huge for Regal, who was one of the greatest British wrestlers to ever live. Mr Money in the Bank Daniel Bryan entered first, and stood in the ring as Regal entered to his usual ominous music as the fans cheered.

They had a few other matches, including on the original version of NXT (the gameshow version) but never had a high profile feud against one another, despite both men wanting it.

Sting still wrestlers semi-regularly at the age of 62 for AEW, and he has taken some crazy bumps that even a prime Regal wouldn’t dream of taking. Tully Blanchard even had a match in AEW, the oldest AEW wrestler so far, despite being 67 at the time.

Regal would not have to have a fast-paced, Young Bucks style match that has his flopping and flying around for 20 minutes. We’ve seen in his last bout with Cesaro that he can create a compelling narrative without taking a bump. His technical style is timeless, and something that Bryan Danielson could compliment in a heartbeat.

We saw with Bryan Danielson vs Minoru Suzuki that he can create a five-star match with nothing but strikes and holds. I have no doubt that even with the ring rust he has, William Regal vs Bryan Danielson could be one of the best World of Sport style matches AEW could ever put on.

However, with William Regal’s broken neck and other injuries he revealed on an interview with Talk is Jericho, it’s unlikely we will ever see him step into the ring as an active wrestler again.

Danielson originally wanted to learn at Dean Malenko’s wrestling school. He even paid his first instalment towards his fees during his time in high school, before he could start his training. However, by the time he had finished his studies, Malenko’s school had shit down, so he sought training from Shawn Michaels.

In the TWA, Danielson learned the basics of pro-wrestling. Alongside his fellow graduates, he took his first steps into pro wrestling, and learned alongside many future stars of pro-wrestling including Brian Kendrick, Paul London and Lance Cade, among others.

He joined the independent wrestling scene in 1999, and was signed to WWE in 2000. He signed a developmental deal with the company and joined their developmental company in Memphis, called Memphis Championship Wrestling. This was where he met his mentor William Regal.

Now, William Regal did not train Bryan Danielson. He was down in MCW not as a trainer, but to get back on track in his wrestling career. Shortly after his WWE debut, he had been suspended by WWE for drug use. He was later released by the company after a stint in rehab, and moved back to WCW in 1999.

However, he returned to WWE in 2000, now clean and with a new mindset. He worked in MCW in the best shape of his life, to prove to WWE that he could be the great wrestler that he had shown in WCW. Here he became friends with Bryan Danielson and fellow TWA alumni Brian Kendrick (then known as Spanky) and began to help them progress in their wrestling journey.

In Bryan Danielson’s book Yes!: My Improbable Journey to the Main Event of WrestleMania, he discusses how he had first met William Regal in MCW and things he taught him about wrestling as a young wrestler trying to find his way in WWE.

“Being at MCW was Regal’s opportunity to prove he could stay sober, and if he did, WWE would bring him back to TV. Not only did he stay sober, but Regal also ended up being the most influential person in my career.“

“The William Regal I met was nothing like the man I’d heard stories about. He was soft-spoken and funny, and he had a genuine interest in helping anyone who wanted to be helped. Regal took to Brian (Kendrick) and me right away when he saw how eager we were to learn.“

“He introduced us to the European style of wrestling, which was heavily based on submissions holds, counters, and advanced mat-based wrestling—something I had never seen before, particularly as it became increasingly more difficult to find European wrestling videotapes would work in a U.S. VCR.“

William Regal himself clarified on Twitter that he did not train Bryan Danielson, nor former WWE Tag Team Champion Brian Kendrick. On a twitter post in 2018, Regal reiterated that the pair were trained by Shawn Michaels and Rudy Boy Gonzalez in TWA, and that they were “already great” when he first came into contact with him.

Would you like to see William Regal vs Bryan Danielson in AEW? Let us know in the comments or click below to keep reading