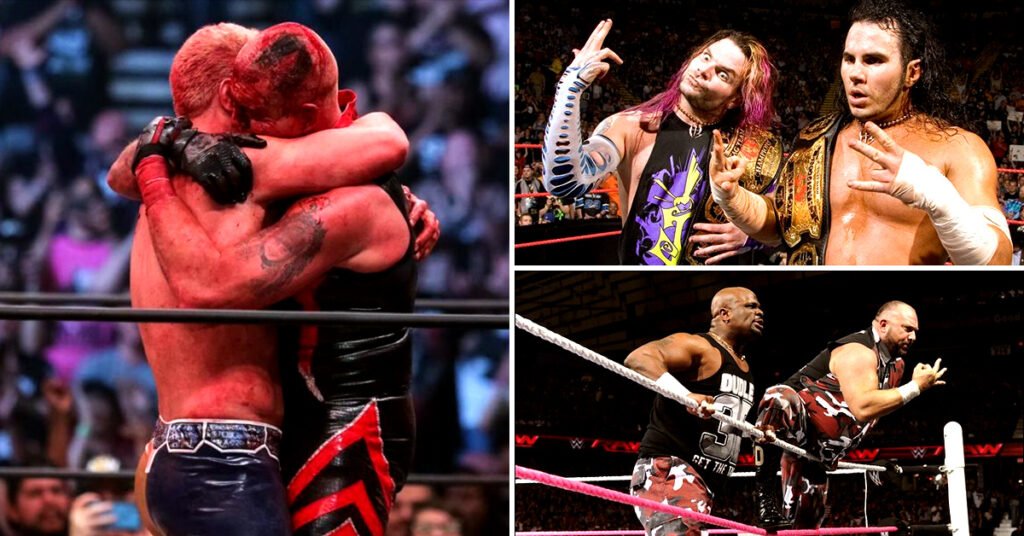 One of the oldest tropes in wrestling is having brothers tagging together. It just makes sense. Nobody would know their partner as well as their brother and it makes for some brilliant tag team action. But deceit is ripe in professional wrestling, and sometimes familial relations are exaggerated, or downright lied about. So, which WWE wrestlers are related? Which WWE wrestlers are actually brothers, as they are claimed?

Here we will look at some of the more high profile claims and dissect whether or not these tag team partners are actually brothers, as claimed, or simply a tool used to pull the wool over our eyes.

Jeff Hardy and Matt Hardy are two of the most famous WWE wrestlers ever. Jeff Hardy is a former WWE and World Heavyweight Champion, whilst Matt Hardy is a former ECW Champion and United States Champion. Together, the two men are nine time tag team champions in WWE as well as winning titles in other companies such as Ring of Honor and TNA.

Are Jeff Hardy and Matt Hardy really brothers? YES! Jeff Hardy and Matt Hardy are brothers, with Matt being the eldest by four years. The pair started out wrestling in their backyard, creating their own Trampoline Wrestling Federation. Eventually they grew out of the trampoline, bought a real ring and formed their own real promotion, called OMEGA (Organisation of Modern Extreme Grappling Arts).

Are the Dudley Boyz really brothers?

The Dudley Boyz are one of the greatest tag team in history. They teamed together for almost 25 years, winning multiple tag team championship in every promotion they ever went to, including ECW, WWE and TNA. They are one of the most influential tag teams in the 1990s and were huge stars during the Attitude Era of wrestling.

Are the Dudley Boys really Brothers? NO! Despite teaming together as brothers for over twenty years, the Dudley are not related at all. They were put together as a tag team by Paul Heyman in 1997, as part of the comedic “Dudley Family” stable. The team were fan favourite, comedy wrestlers, until D-Von and Bubba Ray combined forces to form a serious, hardcore tag team which took ECW by storm.

Are Cody Rhodes and Dustin Rhodes related to Dusty Rhodes?

Cody Rhodes and Dustin Rhodes are some of the most famous brothers in WWE. As his role of Goldust, Dustin Rhodes was an integral part of the the Attitude Era, with one of the most progressive and innovative characters in wrestling.

His brother Cody was one of the top young stars in wrestling since his debut, and destined for greatness in WWE. Whilst he never achieved his goal of becoming the World Heavyweight Champion, he had a great run in WWE winning every non-world championship in the WWE and carving out a wonderful career for himself. He helped form AEW once he left WWE, where he has been an integral part of the promotion.

Are Cody Rhodes and Dustin Rhodes brothers? Yes! Despite the large age gap between the pair, they are brothers. albeit only half brothers. The pair have different mothers but share the same father.

Their father is the legendary wrestler “The American Dream” Dusty Rhodes. Rhodes is a multiple-time former NWA World Heavyweight champion and is considered one of the greatest wrestlers of all time. He appeared on WWE multiple times with his sons, helping manage the duo in their legendary match against the Shield at WWE Battleground 2014.

Are Cody Rhodes and Dustin Rhodes related to Dusty Rhodes? YES! And they have honoured their late father multiple times in AEW.

Bret Hart and Owen Hart are two of the greatest workers of all time. Their battles with each other in the 1990s are some of the finest matches of all time, and as a tag team the pair fought in incredible battles as “The Hart Foundation”. Both from Calgary in Canada, the pair were two of the best workers of the 1980s and 1990s and gained critical acclaim from all.

Sadly, both suffered tragedies. Owen Hart was killed when a stunt went array at Over the Edge 1999, something Owen’s widow Dr Martha Hart never forgave WWE. She has refused to work with WWE to honour Owen’s legacy, but has recently signed a deal to include Owen Hart in the AEW Video Game, as well as a Owen Hart memorial tournament in AEW.

Bret Hart also suffered a brutal injury which ended his career. He suffered a kick to the head in a match against Bill Goldberg in WCW which caused him a concussion. He wrestled matches while concussed which worsened his condition and caused him retire, a sad end for one of the greatest of all time.

Are Bret Hart and Owen Hart brothers? YES! Owen is the younger brother of Bret, and they both worked for their fathers Stampede Wrestling in their hometown of Calgary in Canada.