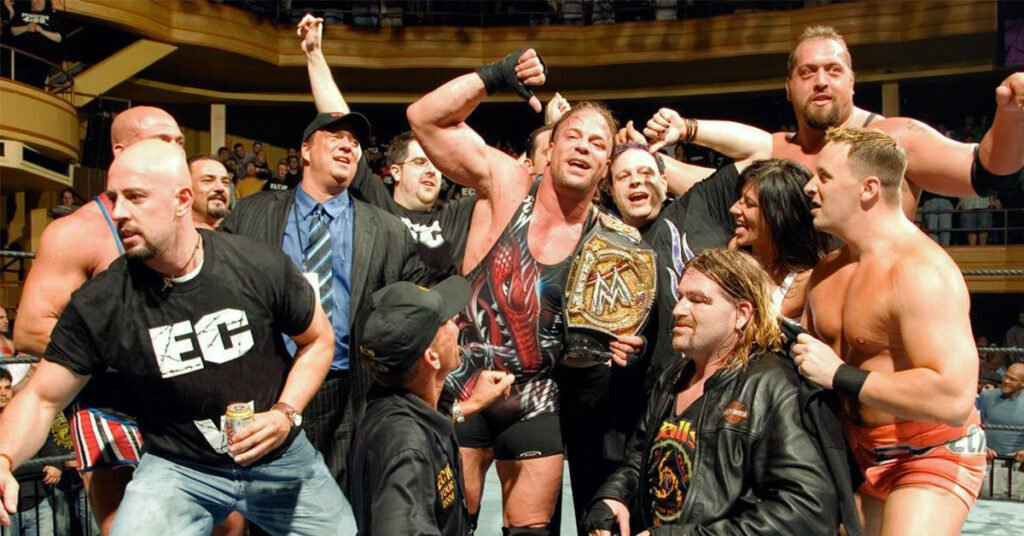 We all know the likes of Tommy Dreamer, Rob Van Dam and the Sandman as being some of the great ECW Champions. Many other men, from Jimmy Snuka from Ezekiel Jackson, have held the gold (and later horrible, horrible silver) from 1992 to it’s ultimate death in 2010. All sorts of stars of the 1990s and 2000s have had ECW Championship matches in ECW and WWE.

But there are some men that you may not know ever challenged for the belt. Whilst we may think of Raven and Rhyno as great ECW Champions, it’s shocking some of the names that they faced during their reigns.

Here are five wrestlers that you never knew had matches for the ECW Championship.

Wrestlers you never knew had matches for the ECW Championship

When you think of the Nature Boy Ric Flair, you don’t think of thumb tacks and hardcore wrestling. Right now you probably think of whipping your dick out on a plane and molesting flight attendants.

Despite that, the last thing you’d expect would be Ric Flair battling it out for the ECW Championship in an Extreme Rules match.

However, on the fifth episode of the WWE ECW reboot, he did just that. The Big Show had just won the ECW title from Rob Van Dam, and WWE were shipping their stars over to ECW to help pop a rating.

One of these was Ric Flair, who cut an impassioned promo prior to the match about his desire to become a 17 time world Champion by winning the ECW Championship. The match took place the 11th July 2006 on ECW, which can be viewed on the WWE network.

The match itself was short, but entertain. Flair mainly just chopped the Big Show, aside from a few low blows and shots with weaponry. He even took a bump on thumb tacks, which was crazy for a man of 406 years old, as he was during the match.

It was his only ECW Championship match, and he would never wrestle any world championship matches after this bout. He would retire less than two years later, at Wrestlemania 24.

While it is widely known that Shane McMahon helped his father Vince to win the ECW Championship, he also had a singles match for the Championship. While he didn’t win the belt, his singles matches not a very well known one.

On the second Raw after Wrestlemania, Shane McMahon challenged Bobby Lashley for the ECW Championship. It was a hair vs Championship match, where if Shane lost he would have his head shaved like his father.

Shane got the upper hand early on in the match, but Bobby Lashley soon turned the tide in his favour. The match was thrown out soon after, after the ref was knocked out and Vince McMahon and Umaga interfered, attacking Lashley.

The episode of Raw would end with Lashley in a crumpled heap, being attacked by the trio. Lashley would face the three men in a handicap match at Backlash 2007 a few weeks later.

Umaga, Shane and Vince would win the match, with Vince pinning Lashley to become the ECW World Champion. Bobby Lashley would win back the title later on, and is one of seven black world champions in WWE.

The Spirit Squad were a team in the mid 2000s in WWE. It was comprised of five male cheerleaders, clad in green tracksuits with an irritating enthusiasm for everything.

They’re best known for beating Kane and Big Show for the World Tag Team titles, and a feud with Shawn Michaels and Triple H which ultimately reformed the team of D-Generation X.

However, once the Spirit Squad (including future World Heavyweight Champion Dolph Ziggler) were shipped off back to OVW, Kenny Dykstra went out on his own. His singles career was wholly unremarkable, the real highlight being a two minute victory over Ric Flair on Raw in 2006.

In 2007 he was just aged 20, and was one of the youngest WWE superstars of all time.

On the February 5th 2007 edition of Monday Night Raw, Donald Trump was in the midst of his feud with Vince McMahon. Bobby Lashley was chosen as Trump’s representative for Wrestlemania 23, so Lashley was despised by McMahon at the time.

Because of this, Vince was not shy in making Lashley defend his ECW Championship whenever he had the opportunity. Kenny Dykstra saw an opportunity in this, interrupting Vince and Johnathan Coachman backstage asking for a match against Lashley. Vince accepted, and the match was set for the semi-main event of Monday Night Raw.

The match is best described as “That is a match that happened”. Both men were at the start of their careers, and thus not great in ring. Lashley had the Goldberg-vibe about him, where he was technically limited but with undeniable power in the ring.

The match was surprisingly open, which I think was a mistake Dykstra had the jobber entrance, already stood in the ring when the commercials ended, so really should have been squashed by Lashley to send a message to Vince.

After ten minutes of passable in ring action, Lashley won the match with an impressive Gorilla Press Powerslam. He retained the championship, and it would be Dykstra’s only attempt at winning the belt.

He would face an active ECW Champion again, but would lose to CM Punk multiple times in non-title bouts.

Known best of the Rock ‘n’ Roll Express, Ricky Morton is not known primarily for his singles matches. However, he did in fact challenge for the ECW World Championship in one of the original ECW championship matches.

The match took place in the Mid-Eastern Wrestling Federation, a small regional company which shut down in 2004. Many former WWF stars appeared for the promotion, like Road Warrior Hawk and The Honky Tonk Man.

Footage for this match is scarce. There was one known piece of footage of the match on YouTube. Sadly, the account was removed for copyright infringement, so the footage is potentially lost forever. Bam Bam Bigelow won the match, with no details of the match available online.

Dr Death was the reason for the infamous Brawl for All pay per view. It wasn’t his idea, you can’t blame him for that. Vince Russo was the maniac who thought that making wrestlers fight for real was a good idea.

However, he had a reputation as one of the toughest guys in wrestling, which ultimately was his downfall. He was knocked out by Bart Gunn, and never recovered in the eyes of WWE fans, and we never got the two Steve’s feuding.

However, while he missed out on the WWE Champion, he did get a chance to face the ECW Champion in 1997. At ECW: Crossing the Line Again, Dr Death took on Raven, trying to capture the ECW Championship. Williams had had six matches in ECW in the year prior to that match, and was not as well known as an “ECW guy”.

The match itself lasted eight minutes, and came just after Williams squashed Axel Rotten in under two minutes. After that bout, Raven confronted Williams in the ring, challenging him to take the ECW Championship from him. The match started immediately.

Raven won after interference from the Blue World Order, with Stevie Richards hitting Williams with multiple superkicks before Raven planted him with the DDT. Raven pinned Williams to retain his championship, ending the impromptu match.

The match would be Williams last televised ECW match. He would wrestle once more for the extreme company, beating Balls Mahoney at an event in Pennsylvania later that year. He would sadly pass away from throat cancer in 2009, ages just 49.

If you liked this article, why not check out an article about all the black world champions in WWE? Or check out a list of Randy Orton best matches? Or if you’re a fan of All Elite Wrestling, check out our post about The Elite, or CM Punk vs Sting.