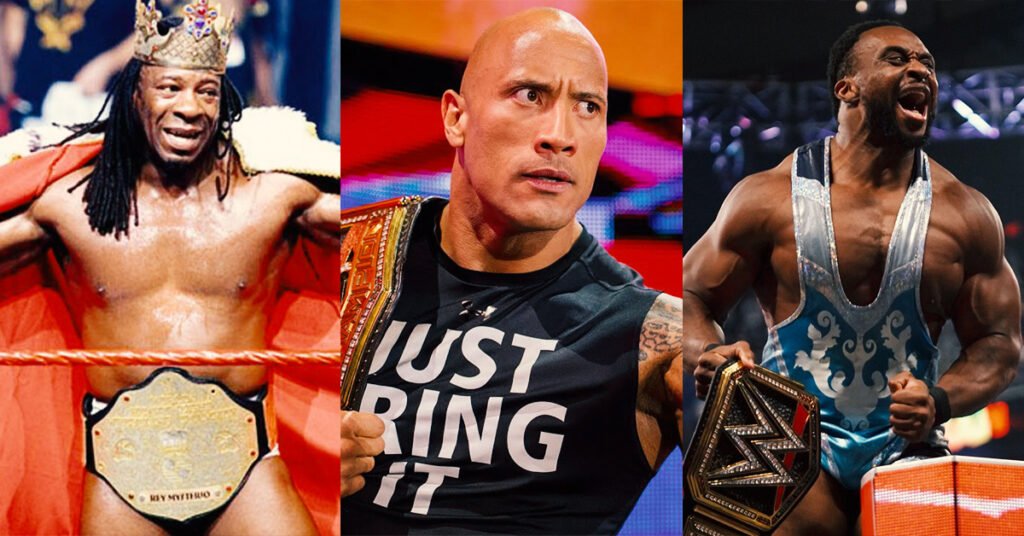 Despite a rich history of black wrestlers in the WWE, the vast majority of world champions have been white. While I’m not here to dispute the reason behind the lack of black world champions in WWE, the issue seems to have been somewhat addressed in recent years. In the last few years, WWE has allowed black talent to stop conforming to the stereotypes they place upon them, allowing stars like Big E, Bobby Lashley and Keith Lee to become some of the most popular men in WWE.

Who are all the Black WWE Champions in WWE History?

The first ever of the black world champions in WWE was one of the greatest champions full stop. Although he is now more known as the biggest actor in the world, Dwayne Johnson is also a legend of the squared circle.

He was a focal point of the WWE Attitude Era, where he and Stone Cold Steve Austin were two of the biggest stars of all time. His feuds with the Texas Rattlesnake, and Mankind, among others, were some of the most intense feuds of all time.

The Rock was a trash talking, arrogant wrestler who took no shit and gave it back tenfold. The Rock won his first world championship in 1998. He turned heel by joining the Corporation to win the vacant WWF Championship, in a match against Mankind. He would go on to hold that championship a further seven times.

The latest win being in 2013, when he defeated CM Punk for the WWE Championship at the Royal Rumble. His win brought many eyes on the product, and the following Wrestlemania had one of the biggest buy rates in history. The Rock would lose the championship to John Cena at that Wrestlemania, facing him for the second year in a row.

The Rock is one of the greatest wrestlers of all time. He was at the height of his powers during the most popular time in wrestling. He helped turn the tide in the war against WCW, and his catchphrases still resonate with WWE crowds today.

20 years after he quit WWE full time to be an actor in Hollywood, fans are still clamouring for a return of The Rock. Roman Reigns vs the Rock could be his last match. The pair are rumoured to be facing each other at Wrestlemania.

The Rock was the first Black WWE champions. He holds the most world championships of any black person in WWE, with 8.