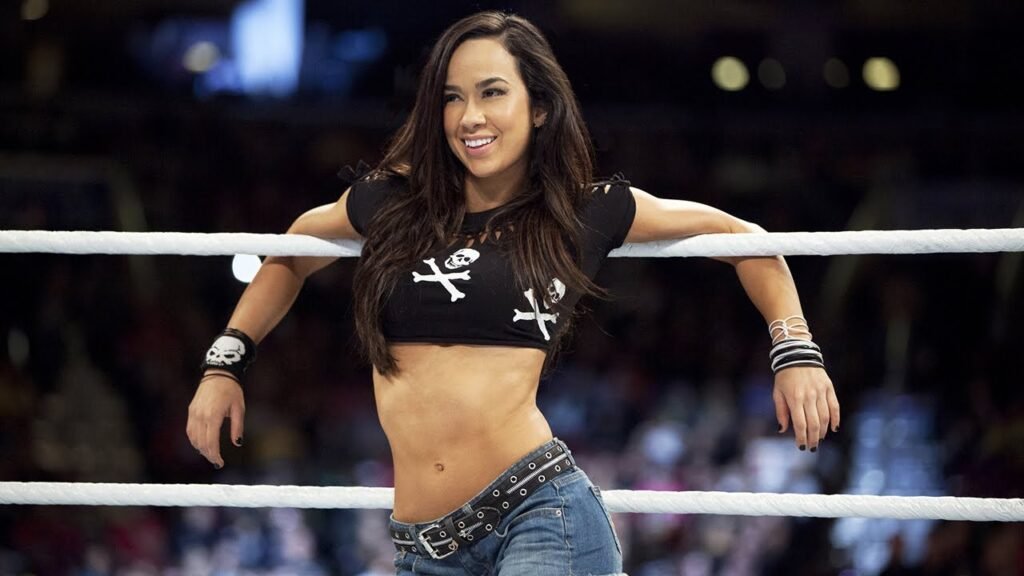 She had teamed with Paige against the Bella Twins the night before at Wrestlemania 31. The pair defeated the sisters in a tag team match and nothing seemed to have gone awry. So why did AJ Lee retire from WWE, and wrestling as whole?

Why did AJ Lee retire from WWE?

There are many facets to AJ Lee’s decision to leave the WWE and retire from wrestling. One reason has to be have been her husband CM Punk’s tumultuous relationship with Vince McMahon, Triple H and WWE as a whole.

CM Punk walked out on WWE after years of mismanagement and neglect made him miserable and ill, to the point where he nearly died due to the failure of WWE’s doctors to treat him. After being critical of him on Colt Cabana’s podcast, WWE’s own doctor Dr Amann filed a defamation lawsuit against Punk, but then WWE star AJ Lee in the middle of a difficult situation.

Wrestling journalist Dave Meltzer, of the Wrestling Observer, claimed that it was “inevitable” that AJ Lee would have to leave WWE due to the bad blood between her husband and company. However, during this time she had not been treated badly by the company. She had won the WWE Diva’s championship moves after everything kicked off, but did not shy away from her own controversies in the company.

Give Divas a Chance

During AJ Lee’s reign as Diva’s Champion, she was not treated how the women are treated today. Despite her record setting reign (which was only beaten once, by Nikki Bella) she was never treated as a top star in the company. She never main evented a show as champion and was never given ample time on TV or PPV to put on a great match.

Compared to the men, the WWE Diva’s were treated as lesser wrestlers. Even AJ Lee, who was the best worker of them all, was never given her due. She had become a huge star in WWE, as the manager of Daniel Bryan and with her relationships on TV with CM Punk, John Cena, Dolph Ziggler and Kane. She even appeared with Daniel Bryan and The Rock in a blockbuster segment on the special episode of Raw, called Raw 1000.

WWE planned The Rock vs Sting for Wrestlemania?

Despite all this success, in the ring AJ Lee was never appreciated by WWE. In addition, the women were not treated as equals in WWE. The women’s division had some great wrestlers like AJ Lee, Natalya and The Bella Twins, but they were never given the chance to shine. Two minute matches were common and there was never more than one women’s story on the show.

Compared to the men, they were feeding on scraps and AJ Lee was sick of it. What she was really sick of was the hypocrisy of management, including daughter of the Chairman of WWE, Stephanie McMahon. Stephanie was always touting the progression nature of WWE despite holding down the women so they stood behind the men in the ranks of WWE.

AJ Lee made many remarks when replying to a McMahon tweet about the evolution of women, remarking that WWE paid women a fraction of the amount of men despite having record selling merchandise, among other things.

The immediate impact of AJ Lee’s tweets was huge. WWE immediatley started treating the women better. They gave them more time in the ring, gave them main event slots and even called up some of the best workers from NXT in order to beef up the WWE women’s division.

They even got rid of the awful WWE Divas Championship “Butterfly Belt” and replaced it with the WWE Women’s Championship, with the belt a counterpart to the men’s WWE Championship.

However, AJ Lee would not be there to see the Diva’s Revolution, as it was branded to death by WWE. She left the company in April 2015, one year before the historic reveal of the WWE Women’s Championship at Wrestlemania 32.

She started the Divas Revolution, some argue, with her incredible promo on an episode of Raw in 2013. As the Divas Championship, she came to the ramp and cut the counterpart to her husband CM Punk’s “Pipebomb”, and ran down the WWE women’s division at length. She critiqued their ability, work ethic, love for wrestling and their involvement in WWE’s reality show “Total Divas”. She also alluded to rumours of the Divas sleeping with management in order to get ahead in their roles.

This promo showcased that women in WWE had the fire and desire to be more than just the models of yesteryear. AJ Lee started the women’s revolution, but like all great revolutionaries, never got to see the fruits of her labours inside the ring.

Spinal Injuries forced AJ Lee to retire from the ring. Whilst she may have been burnt out after her treatment by WWE management, she was ultimately unable to compete in the ring due to injuries sustained while wrestling for years.

On her Twitter account, she revealed the horrific injuries she was suffering with before she faced Paige for the WWE Divas Championship at Summerslam 2014. The match was a short one, with Paige winning without Lee having to take a single bump, which Paige revealed on WWE Backstage.

“I was going to be the Divas Champion for a second time, I just remember her nursing something, and knowing the next day she was going to take a break and go take care of it,” Paige recalled on WWE Backstage. “We actually got through the whole match without her taking one bump. Which is wonderful! I said, ‘We’re going to protect you at all costs.’”

Meanwhile, AJ Lee revealed the true extent of her injuries that day on her Twitter feed. She revealed she had three herniated disks in her spine before the match, which is a similar injury which was the reason why Nikki Bella retired from wrestling too.

“I herniated 3 discs in my cervical spine the week before this match, couldn’t turn my head or feel my hands,” Lee wrote on Twitter. “Doctor asked me if I had been in a car crash, haha. @RealPaigeWWE protected me fiercely like a goddamn superhero (I think even helped dress me), so I heart her forever.”