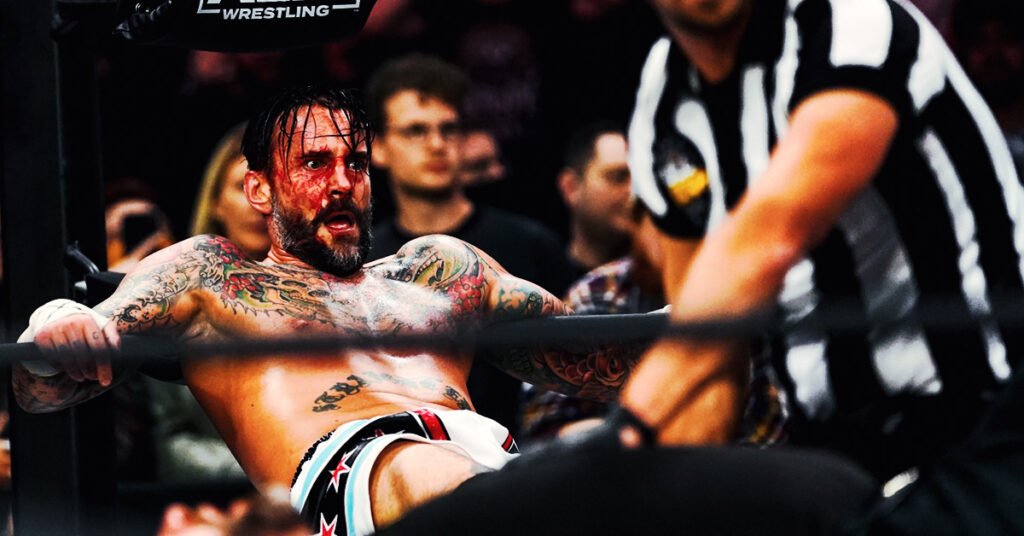 AEW Full Gear proved itself to be one of the best shows of the year. It featured a 5.5 and 5 star match from Dave Meltzer, but in my mind it featured two more five star matches – Darby Allin vs MJF, and CM Punk vs Eddie Kingston.

In this article, we will talk about the match between CM Punk and Eddie Kingston. The match had very little build, and started from Eddie Kingston interrupting a CM Punk interview backstage.

Yep, that is how it started. Yet within one promo, it became one of the most heated matches on the Full Gear card.

The Eddie Kingston and CM Punk promo was one of the most real promo’s in AEW history. Everything these two guys say just feels real. I truly believe that Eddie Kingston hates Punk based on this promo.

Their meeting in the ring came about when Eddie Kingston walked in on a CM Punk interview. Kingston had just lost an incredible match to Bryan Danielson in the AEW Eliminator tournament, and was angry at his lost.

CM Punk just happened to be in his way and suffered his ire.

Or so you’d think.

Kingston revealed on the following Rampage that he held resentment for Punk since the pair met 15 years ago. In the locker room, he felt judged by the likes of Punk, Samoa Joe, Amazing Red, Homocide and Bryan Danielson.

He felt like they judged him for not working too hard, for being too far, and for his background on the streets.

Punk disagreed. He said they did judge him, but not for those reasons. Because they saw potential in him which he failed to live up.

“It’s a hard pill to swallow, but we judged you and we held you to a standard of the potential that we saw in you.” Punk said about Kingston. “You’re the one who fell short of that mark. You can blame me and you can lose in the middle of the ring to a guy like Bryan Danielson and then you can walk in the back and you can try to blame me but it’s not my fault. I am not wrong for seeing greatness in you 15 years ago but I damn sure I’m a fool for trying to hold you to that standard and expect greatness.” Before adding, “Because you’re a bum!”

The battle ended with Kingston telling Punk to leave AEW, just like he left WWE, causing the pair to brawl.

“Before you leave, I don’t care about winning and losing at Full Gear. All I’m going to do is beat you up, and after I’m done beating you up? Do me a favour, quit again and leave for seven years and…” Kingston said to Punk, before eating a brutal headbutt.

The pair got into a heated brawl, which extended into the following week. They had to be held apart on the following AEW Dynamite, as the rivalry hit fever pitch.

The pair both entered Full Gear looking to kill. Eddie Kingston walked the ring, emotionless with the only thing on his mind being all the ways he could hurt CM Punk.

Punk was equally focused. On the way to ring, his eyes never left Kingston. He even forwent his usually “It’s clobberin’ time!” on the ramp. It showed just how intense this feud was.

The match soon descended into an all out brawl. It began with CM Punk trying to wrestle vs Eddie Kingston deciding the punches, headbutts and eye pokes were the order of the day.

Kingston got Punk in the corner and hit a brutal Exploder Suplex on the former ECW Champion. Punk responded with a flying forearm, followed by a flurry of punches. He kicked Kingston, who asked for more with every kick, before ending it with another poke to the eye (Punk previously complained about eye pokes in his podcast with Colt Cabana).

Punk made a number of call backs in this match. He performed the Three Amigos, the triple suplex that was popularised by Eddie Guerrero. The former WWE Champion passed away 16 years to the day in the very city AEW Full Gear took place.

Another call back was to CM Punk’s feud with John Cena. Fans noticed similarities in the confrontation on Rampage, to CM Punk and John Cena in 2013. CM Punk leant into that, performing Cena’s famous “Five moves of doom”, replacing the Five Knuckle Shuffle with a simple middle finger.

After a wild ten minutes of brawling, both men lay in the corner, resting their weary bodies. However, they both stood up at once, and ran toward each other. They proceeded to empty a flurry a fists on each other, neither one wanting to let the other gain the upper hand.

By this point, CM Punk had suffered a huge gash to the head. Kingston threw him head first into the ring post, and exacerbated the cut by punching and scratching at the wound.

Punk hit a handful of elbows into the head of Kingston, after hitting him with a GTS out of nowhere. He struggled to get Kingston to his feet, before launching a series of knees into his head and abdomen.

He then lifted him up on his shoulders, and hit the second Go To Sleep of the match. This time, Kingston had no answer and Punk got the one-two-three for the victory.

After the match, Punk offered a hand to Kingston out of respect. Respect he had no shown him 15 years ago. Kingston refused, and walked out of the ring not acknowledging Punk nor his token gesture.

This match is one of the best brawls so far in AEW. Maybe their have been longer and more brutal ones, but none with the wait of the two men’s history behind it.

In CM Punk vs Eddie Kingston, you really felt a dislike between the pair. You felt that Kingston really held on to this resentment for all those years. You knew that he watched CM Punk make his millions in WWE, while he nearly had to give up wrestling due to not making a living out of it.

The match wasn’t a five star classic for me. It was a brilliantly paced match which made CM Punk look like the best he has since his return. As well as that, it made Eddie Kingston look like he could be a brilliant main event babyface or a dastardly main event heel.

I’d rate it a four star out of five match. It definitely left room for a future match, hopefully in a “Lights Out” Match.

Both men deserve an AEW title run, although I think we’ll definitely be seeing CM Punk as AEW Champion much sooner than anyone things.