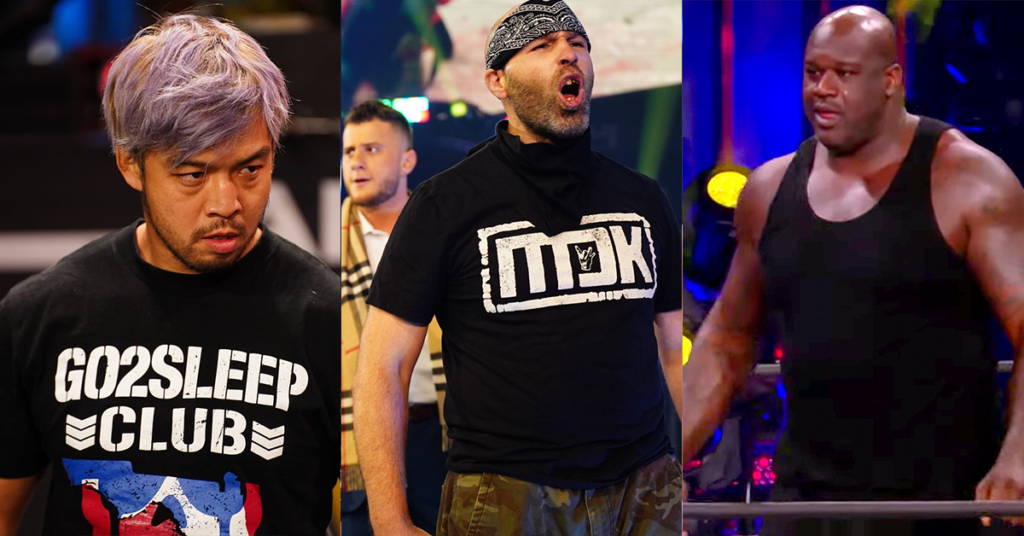 Hey Yo! No, it’s not that kind of outsider your thinking of. Look at the adjective ‘Outsider’. “a person who does not belong to a particular organization or profession”. In this case, that organisation is AEW. We’re looking at the top 5 wrestlers outside of AEW to appear in their new video game.

Our last article about the new AEW Video Game went through wrestling legends who should appear in the game. AEW VIDEO GAME LEGENDS

This article will go through the top 5 stars of professional wrestling, who have made an appearance for AEW, but are not full time members. This means they are not under contract. They don’t look likely to return, but would be fun to play with on the AEW Video game nonetheless.

Here is a list of the Top 5 stars outside of AEW who should be part of the AEW Video Game roster.

The former Hideo Itami is currently wrestling for NJPW. He made appearances in AEW February, when he attacked IWGP Heavyweight Champion Jon Moxley. He also teamed with Kenny Omega to take on Moxley and Lance Archer, with KENTA’s side winning.

KENTA last appeared in a WWE video game in WWE 2K19. He was released by WWE after the games release. He then signed with NJPW, competing in the G1 Climax and IWGP US title matches.

KENTA was a pioneer of Indie-style wrestling in the mid 2000s, and his bouts with the likes of Bryan Danielson and Samoa Joe still hold up today. He would be an excellent edition to the AEW Video Game Roster, with many dream matches available to have him rank in the top 5.

The chance to recreate his NJPW Strong bout with Jon Moxley. Or, he face another NJPW legend in Kenny Omega would be a interesting idea for AEW fans.

Nick Fucking Gage is a man who has gained recent notoriety due to to a number of factors. A Dark Side of the Ring episode chronicling his drug addiction, bank robbery and rejuvenation in GCW brought him to the attention of the general public this year.

Next he feuded with Matt Cardona over the GCW Heavyweight Championship. A series of tweets between the two moved onto run ins and eventually a deathmatch at GCW Homecoming in July 2021.

Just before their deathmatch, Gage appeared on AEW Dynamite, as the second of Jericho’s “Five Labours of Jericho”. He was defeated by Jericho in a death match in the main event of Dynamite. The fact he was able to main event an AEW show means that he has earned enough credit to be included in the new AEW Video Game, and that is why he’s in my top 5 list.

Despite only a single appearance on Dyanamite, Jeff Cobb remains a favourite of AEW fans. The Polynesian superstar has made waves recently with a great run in NJPW, and has talked about turning down offers from both WWE and AEW in the past year or two.

Jeff Cobb was brought in for one Dynamite to face Jon Moxley, in his long term feud with Chris Jericho and the Inner Circle. Moxley was victorious in this instances, but the door has been left open for a return. With his varied move set and unique in ring style, Jeff Cobb would be an excellent addition to AEW’s Video Game roster.

The famous American basketball player is so far the tallest man to appear in AEW. Shaquille O’Neil, or Shaq as he’s known, beat Cody Rhodes and Red Velvet while tagging with Jade Cargill. Shake is one of the most famous sports star in American, and is a huge sports personality.

Shaq is one of the biggest stars to wrestler in AEW, and would be a huge get for the AEW game. He can be put in dream matches against the likes of Paul Wight (the former Big Show) or even a rematch with Cody Rhodes.

Shaq wrestled previously at Wrestlemania, competing in the Andre the Giant memorial battle royal. This was his only WWE match so far, although he has yet to feature in any WWE games.

The man who rules ass is one who would be a welcome addition to the AEW Video Game roster, and is in my top 5. The 8 year veteran lost to Cody Rhodes in July 2020, in a TNT Championship match. Since then, his stop on the independents has grown immesurably.

He currently teams with Danhausen in the team “Warhausen”, It would be ideal to have both men, huge independent stars, to make this roster have an all-star feel to it. They are both great additions, but only Warhorse has made the cut for my top 5 AEW Video Game roster members, due to Danhausen not yet appearing on Dynamite.