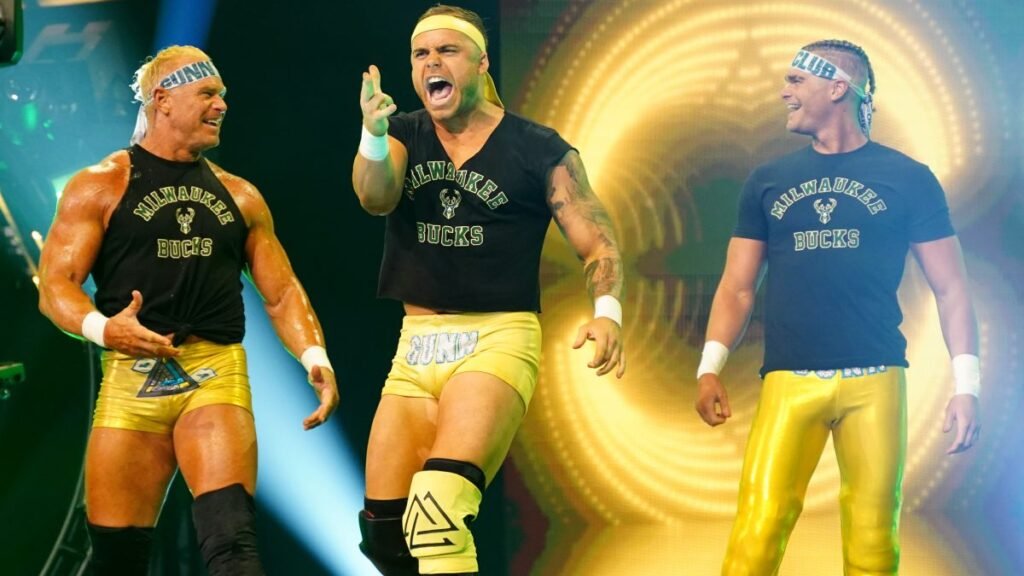 The Gunn Club in AEW are one of the fasting rising and most exciting young tag teams in the company. Firstly they were just known for their famous father, Billy Gunn, but now Colten Gunn and Austin Gunn are making a name for themselves as stars of the AEW tag team division.

As a trio, the three men are known as “The Gunn Club”. Sharing the surname of their WWE Hall of Fame father and D-Generation X member Billy Gunn, Austin and Colten have risen the ranks through AEW Dark to earn themselves a regular spot on AEW Dynamite and AEW Rampage. With their 6 foot 5 father as their backup, the tag team duo have no problems facing anyone in AEW, and even team with their dad on occasions, including against the Blackpool Combat Club.

The Gunn Club trio consists of Austin, Colten and Billy Gunn, and they wrestle as a team together in the AEW Tag Team Division.

Billy Gunn is a legend of the WWE tag team division, winning the WWE Tag Team Championships 6 times with partner Road Dogg as part of the New Age Outlaws (and DX). Now aged 58, Billy Gunn teams with his sons in AEW as well as helps train the next generation of wrestlers.

Austin Gunn is the son of Billy, and the first of the two Ass Boys to be signed to WWE. He made his debut for the company in early 2020 teaming with his father, but an injury kept him out for 11 months. By the time he was back in the ring, he had been joined in the ring by brother and tag team partner.

Colten Gunn debuted in later 2020, teaming with Billy and Austin, the first time the Gunn Club trio had wrestled together in AEW. They have since had many matches together, with the Gunn Club in AEW racking up an impressive win streak, albeit mostly on AEW Dark and Dark Elevation.

Another name that has been given to the Gunn Club in AEW is a derogatory name – The Ass Boys.

The name is based on Billy Gunn’s former gimmick of “Mr Ass”, a man who loved asses and wasn’t afraid who knew. At the time, ROH wrestler Danhausen referred to the elder Gunn as “Billy Ass”, and his sons as the “Ass Boys”.

Now in AEW, Danhausen looks set to rekindle his feud with the two young Gunn’s, which originally started on Twitter, and will hopefully lead to a Best Friends vs Ass Boys match, when Danhausen comes back from a broken leg that he suffered on October 31, 2021.

Danhausen even commissioned a new theme song for the Gunn Club to use in AEW, called “Billy Ass and the Ass Boys”.

What do you think of the Gunn Club in AEW? Let us know in the comments or click below to read more