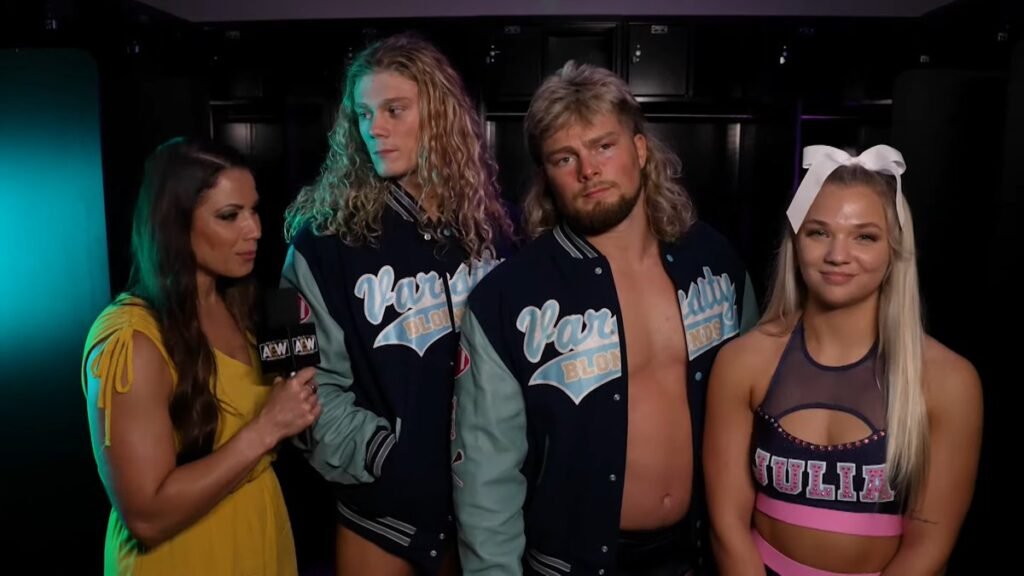 Do you think the Varsity Blondes will be future AEW Tag Team Champions?

AEW is increasingly improving its roster, including established superstars, legends, and new talents; the Company of Khan is expanding, trying to provide a more varied product. This includes adding a number of second-generation wrestlers to their ranks.

Lately, for instance, we’ve witnessed the debut of Brock Anderson, the son of Arn Anderson, supported by his dad and Cody Rhodes. Still, there was also the arrival multiple former WWE (World Wrestling Entertainment) superstars, including Malakai Black and Andrade El Idolo.

Surely, the more time passes, the more All Elite Wrestling tried to establish itself in the pro wrestling market, forever bringing new talented faces and trying, even with the fact that it’s finally back on tour. AEW has endeavoured to bring in all the top talents to their show, and also to promote some of the best young up-and-comers in the world of wrestling to their main show from AEW Dark.

With the new signing of 2 sensational young talents who’re ready to show all they can do in the ring and have chosen the AEW as their home to work – The Varsity Blondes.

The Varsity Blondes is a Pro wrestling tag team consisting of Brian Pillman Jr. and Griff Garrison, and they look to be two of the biggest young talents in AEW. They are one of the top tag teams in the AEW Tag Team division and look a sure bet to become future AEW Tag Team Champions.

Brain Pillman Jr., the son of a well-known wrestler Brain Pillman Jr. and Griff Garrison, who combined to form the Varsity Blondes group, has officially signed with AEW.

The pair are part of an American College-Style Trio, where Julia Hart accompanies them as their manager. Brian Pillman Jr was waiting for his contract with MLW to end to sign with All Elite Wrestling, which finally came about last year.

So, now both have signed a full-time agreement that’ll often bring them to screens in the many weeks of shows that All Elite Wrestling offers.

The two regularly battled around the outbreak, with Garrison making his 1st appearance at the Company in Jun 2020, while Pillman was the month after that. It wasn’t until that September when they were first united as their current tag team, named The Varsity Blondes.

Brain Pillman Jr. and Griff Garrison were previously working under tiered agreements, but it was noted a long while back it was considered a foregone conclusion they’ll both end up with full-time AEW agreements. Brain Pillman Jr. Made his debut at the promotion’s 2019 PPV Double or Nothing when he competed in the Casino Battle Royal.

Brian Pillman Jr. started working more dates for All Elite Wrestling, as he was permitted to compete for them while still agreeing with MLW. He last competed for MLW against Lio Rush, who was the Middleweight titleholder.

Griff Garrison made his AEW debut on June 16, 2020, when he lost the game to Lance Archer in a singles battle. Then he started working more dates for All Elite Wrestling until he and Pillman Jr. fits teamed combined on Aug 4, 2020, as the Varsity Blondes.

Both stars make their debut on different and instantly mess well together even though they do not have an official name. Brain Pillman Jr. and Griff Garrison were initially used as the team to get other teams over. Though, the two talented wrestlers were not trying to be kept down.

They were extremely talented and charismatic to stay down for too long. After a few months of teaming, they started known as Varsity Blondes. The name is a play-off a tribute to Brain Pillman’s father team with Steve Austin, famous as The Hollywood Blondes. With the new name set and some interesting entrance music, the team picked up a big win in their 1st match with the new name – The Varsity Blondes.

This was a sign of greater things to come for young talents. Since then, both have continued to put in consistent work. They’ve been winning as a team on Dark Show of AEW. Though, they’re still struggling to pick up wins on the major roster. Despite that, Varsity Blondes shows that hard work does pay off in the last.

I’m positive that these guys will soon be a top tag team in AEW. They’re both still very young and learning more each day.

They’re in a company with several Wrestling super starts, including many tag team experts like Christian, Arn Anderson, and Matt Hardy, to name a few. With this assistance around them, it’s nearly more difficult for them to fail than to succeed.

Pillman Jr. is still partially working in MLW. The Company could be waiting for both men to be entirely AEW for a true push. If not all the fans show interest in both alone and together, they make a good match. The wrestling fans were once chanting who Garrison was; now, the whole world knows rightly who he is.

Now, where could we find them in the future? In Varsity Blondes, we can admit that they still have a lot of work to put in and experience to gain. Though they seem to be a team of the future stars, and we’d soon see Pillman Jr. hold the tag team title like his father. Could Garrison possibly be the future stunning Steve?

As revealed by Julia Hart in Twitter, Julia Hart is not related to Bret Hart or the rest of the legendary Hart Family.

The AEW has long been thought to be a part of the Hart Family, which included Bret Hart, Owen Hart, Jim Neidhart and British Bulldog (among many others) due to her sharing the Hart last name.

However, her having the same last name is merely a coincidence as revealed by Julia Hart on Twitter.

The Varsity Blondes star tweeted out “I’m not related to anyone in wrestling” in response to a question which she had earlier failed to answer.

Do you think the Varsity Blondes could be future AEW Tag Team Champions? Let us know in the comments or click below to read more