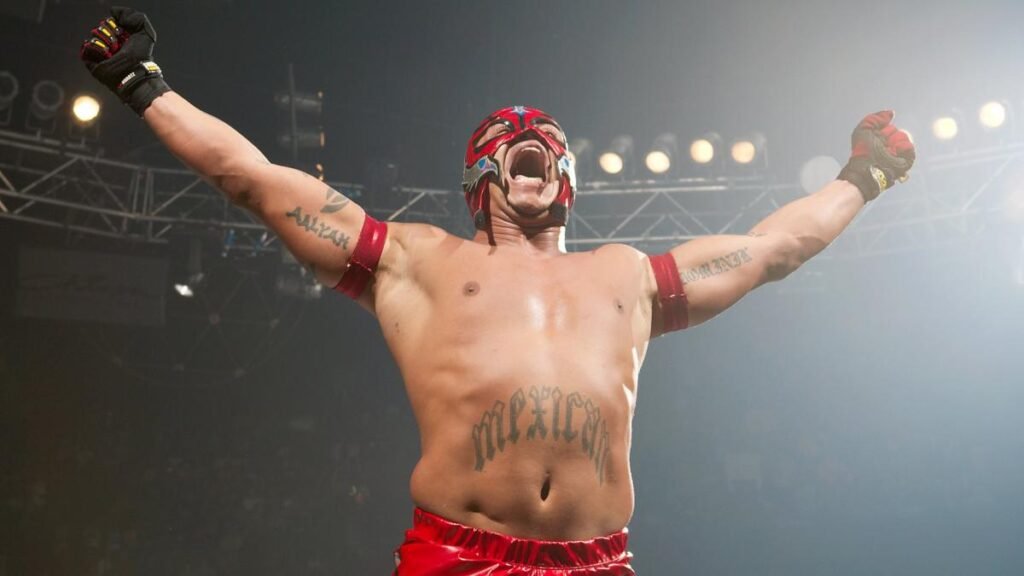 Fans will instantly recognise Mysterio’s iconic mask, which can be seen weekly on WWE TV and donned by children at WWE live events across the globe. However, many fans will be wondering what Rey Mysterio without mask on looks like. He has kept his identity secret for many years and most WWE fans will have never seen his face.

Rey Mysterio Without Mask On

Whilst in WWE Rey Mysterio has always kept his mask on, it has not always been the case. Whilst part of the cruiserweight division in World Championship Wrestling (WCW), Rey Mysterio was unmasked live on pay per view at WCW Superbrawl IX.

Unmasking is one of the most disrespectful thing that can happen to you in Lucha Libre. Seeing Rey Mysterio without his mask one would be one of the most dishonourable thing that could happen to him, as per the history of wrestling in Mexico. Whilst mask’s are usually put on the line in matches in Mexico, they are usually huge main event matches between two heated rivals, not on a random PPV match in WCW.

At WCW Superbrawl IX, Hall and Nash defeated Mysterio and Konnan to force Rey Mysterio to take his mask off in front of the huge crowd. It was one of the most shocking unmaskings in US wrestling history. Fans had grown to love Mysterio and his iconic mask was an important part of his look. It was also part of his heritage, with his father also going by the name Rey Mysterio in Mexico.

Rey Mysterio unmasked after the match, revealing his face for the first time in history. Fans were shocked seeing Rey Mysterio without mask on, and it ruined a lot of the mystique and character he had built up in WCW.

Rey Mysterio would continue to wrestle in WCW without his mask until the closure of the company in 2001. Due to his contract still being paid after WCW folded, he stayed out of wrestling for a year, healing his injuries and biding his time until he would debut in WWE.

Mysterio would debut in WWE in 2002, but Vince McMahon was insistent that the former WCW Cruiserweight Champion should wear his mask. However, Rey Mysterio without his mask on seemed like an inevitability, as usually luchadores could not don the mask once it had been taken from you in a match.

On the request of Vince McMahon, Mysterio asked the official Lucha Libre Commission if he could wear his mask again. This was due to the outcry in Mexico of Rey Mysterio wrestling with his mask on again, disrespecting the years of tradition in Mexico.

However, Rey Mysterio later revealed that he never even wanted to remove his mask. In a web chat for Sun Online back in 2008, Mysterio revealed that he was strongly against losing his mask, stating that WCW did not understand what the tradition meant to himself, his family and Lucha Libre fans in Mexico.

“I was strongly against it! I don’t think WCW understood what the mask meant to me, to my fans and to my family. It was a very bad move on their behalf.“

“The fans wanted Rey Mysterio with the mask and losing it hurt me a lot. It was also frustrating that it didn’t come as the climax to a feud with another masked wrestler, but in a throwaway match.”

“The same thing happened to Juventud and Psicosis and psychologically wise it was a bad move by Eric Bischoff. I think the fans understand that I was in a position where I had no option – I either had to lose my mask or lose my job.”

With the revelation that the option for Mysterio was to lose his mask or lose his job, it is no surprise that he chose to keep his job. The wrestling scene in Mexico is nowhere near as profitable than in the United States. In addition, if WCW fired him, it is unlikely WWE would add him to their roster.

Their Light Heavyweight Division was an afterthought and he would have likely been treated even worse in WWE than WCW. Still, we may never have had to see Rey Mysterio without his mask on if he had taken his P45 and moved on to working for WWE, or maybe even back to AAA or NJPW in Japan.

Rey Mysterio with his mask on became one of the greatest WWE wrestlers of all time. The Mexican Luchador is a two-time world champion in WWE, winning the World Heavyweight Championship and WWE Champion in 2006 and 2011, respectively.

He left WWE in 2015 before returning again at the 2018 Royal Rumble. He impressed in the match, with his mask still on, which earned him a new contract with the company. Since returning to WWE full time, he has become a United States Champion and won the WWE Tag Team Championships alongside his real-life son, Dominik.

He is also the star of WWE 2K22, being the focus of the games WWE 2K22 Rey Mysterio showcase mode.

What do you think about Rey Mysterio without mask on? Do you think he should have refused to lose his mask in the match against Scott Hall and Kevin Nash? Let us know in the comments or click Next Article to read more