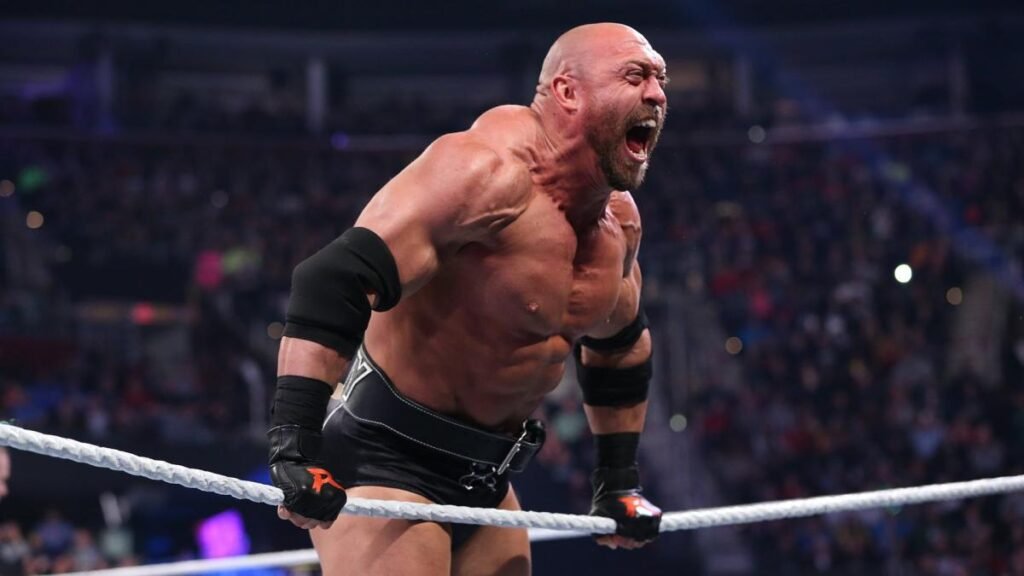 Ryback vs Ultimate Warrior? That match nearly happened, keep reading to find out how and when.

Its common knowledge that the original plan for Wrestlemania 30 was very different to what we got. However, one match people will be shocked to hear was in the works was a dream match between Ryback vs Ultimate Warrior.

A dream match for who? I’m sure someone somewhere. The Ultimate Warrior hadn’t wrestled in 6 years, and that match was his first one in years. In his last ever match he defeated Orlando Jordan in a match in Spain, so his wife and children could see him wrestle for the first time.

Curiously, Ryback claimed on an episode of the now defunct Conversations with The Big Guy podcast that he was shown plans for a match against The Ultimate Warrior at Wrestlemania 30.

The Ultimate Warrior had long retired from WWE and wrestling. He had not wrestled for the WWE since 1992, and his last match had been four years earlier in 2008 in Spain.

He had not long returned to WWE, having been brought back for a Hall of Fame induction and as part of the WWE 2K14 promotional material. He was included as a pre-order bonus in the game, and his legendary Wrestlemania match vs Hulk Hogan was included on the game.

Ryback was on a downward trend in WWE, however. He no longer was getting the monster reactions he had been in mid 2012 and was in a unsuccessful tag team with Curtis Axel. A loss to CM Punk followed by a disastrous heel turn against John Cena had lowered the former monsters stock in the company, and he was nowhere near the main event.

So, Ryback was as shocked as anyone when Mark Carrano, Former Senior Director of Talent Relations in WWE, handed him a prelimary sheet that had Ryback vs Ultimate Warrior on the card for Wrestlemania 30.

However, Ultimate Warrior was in no shape to wrestle and passed away two days after the event, after being inducted into the WWE Hall of Fame

After making the claim of a Ryback vs Ultimate Warrior match, Warrior’s widow Dana fired back at Ryback. She completely denied the match was due to take place, and accused Ryback of lying to promote himself and his podcast, a claim he emphatically denied.

On episode 48 of Conversations with The Big Guy, Ryback responded to Dana Warrior’s claim that his statement was a lie, and explained why the information about the match came out, and how he learned about it. He also doubted the validity of the match, thinking it could have been a joke played on him by WWE executives.

“We were asked a question by a fan if it was true about Ultimate Warrior/Ryback at WrestleMania 30, which I thought I answered very truthfully as I always have done here [on this podcast], and shared a true story about Mark Carrano sharing with me a very early preliminary sheet on WrestleMania, which it said Ryback vs Ultimate Warrior,” said Ryback. “I even mentioned that it could have been a big rib by WWE. It could have been them just f***ing with me, but that I was shown that, and then me and you [Pat Buck] discussed the possibilities of that match if it would have happened.

“Why would I make something like this up from several years ago if it wouldn’t have made any benefit to do so if I made it up,” Ryback questioned. “I’ve met Dana several times, and had always pleasant conversations with her and her two daughters, in which I will not share the encounter I had with her and her very kinds words towards me from her husband, which don’t need to be said here. That was my last meeting with her.”

Ultimately, the match would not take place. Ryback vs Ultimate Warrior remained a dream match for some people (I’m sure there’s someone) and is one left solely for those playing WWE 2K14.

Ryback teamed with partner Curtis Axel at Wrestlemania 30. They lost a match on the pre-show, a fatal 4 way tag team match including The Real Americans (Jack Swagger & Cesaro), Los Matadores and The Uso’s. The Uso’s picked up the win, and Rybaxel never won the WWE Tag Team Championships.

Meanwhile, The Ultimate Warrior was inducted into the WWE Hall of Fame the night before Wrestlemania, and made an appearance on stage at the event. He would then go on Monday Night Raw the next night, cutting an eerie promo which became even more poignant after his passing the next day, aged just 54.

What did you think of the idea of Ryback vs The Ultimate Warrior? Let us know in the comments or click Next Article to see why Chris Jericho thought Ryback should have ended the Undertaker’s streak!