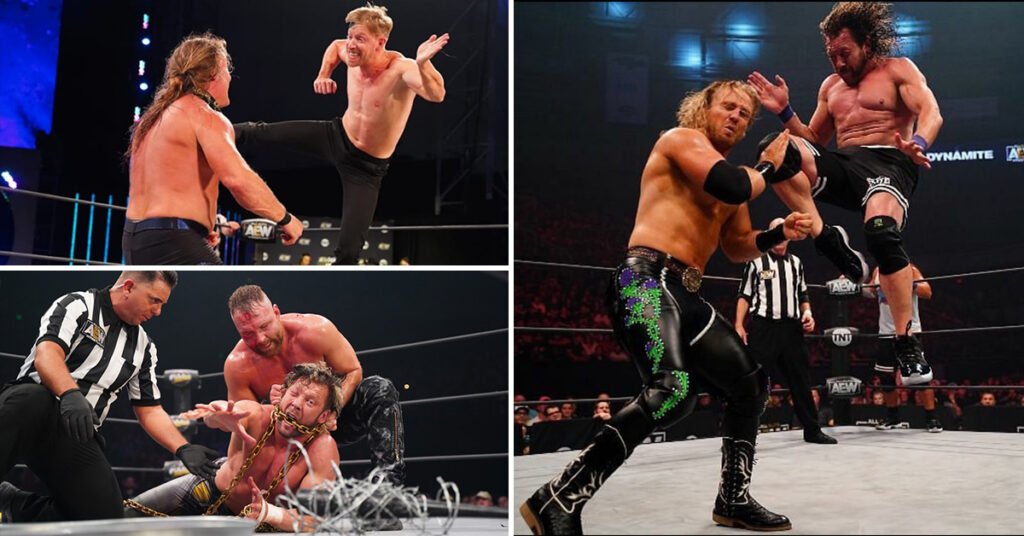 What is the best feud in AEW? We look at the greatest feuds the company has ever seen

Wrestling is great. Seeing two men fighting in the ring is entertaining to watch. But unless there’s a story, a real reason behind the fight, then it’s just not the same. When the fight is personal and relatable, and you just want one guy to beat the other guy so badly it enrages you, then they’ve got you hooked. That what makes a great wrestling feud.

AEW has had some of the best feuds in the world in recent years. Despite have incredible in-ring action, Tony Khan also likes to focus on character work and stories. If there’s no reason for people to want to see a match then they wont watch. Having exciting and relatable stories makes the show must see, and people tune in in their millions.

There are so many great feuds over the past three years in AEW. Somehow we’ve narrowed it down to just the five best, but there are many, many more which could be argued to be on this list.

Eddie Kingston vs CM Punk started from Kingston interrupting one of Punk’s interview, and ended up as one of the matches of the year. Their bout at Full Gear 2021 out an end to their month-long affair, but highlighted two things – Eddie Kingston in a main eventer, and CM Punk is back.

The highlight of their feud however was the promo between the two on an episode of AEW Dynamite. Both men laid into each other for personal reasons spanning back 20 years. They made it feel real, and made you believe that they really hated each, and just wanted to fight.

The Pinnacle vs The Inner Circle

The Pinnacle vs the Inner Circle feud was one of the longest running and most entertaining feuds in AEW history. It spanned months and months, and involved multiple matches, shocking twists and even a song and dance number.

It began with MJF trying to join the Inner Circle, wanting to learn from and befriend the legendary Chris Jericho. The Inner Circle was sceptical, with Sammy Guevara even leaving the group for a short spell. MJF tried his best to convince them to let him, and Wardlow, join the group. This included Le Dinner Debonair, the musical number where the pair sang and danced around in the weirdest segment of the year.

Eventually MJF beat Jericho to earn his spot in the group. However. he would eventually turn on the group, forming his own team involving himself, Wardlow, Shawn Spears and FTR. This team was dubbed the Pinnacle, and they would feud with The Inner Circle for some time. This included the first ever Blood and Guts match in which The Pinnacle were victorious.

Next came the Five Labours of Jericho. Harkening back to the labours of Hercules, MJF set Jericho five challenges he had to defeat. Before he could face MJF, who was the fifth labour, he had to defeat four other men inside the ring. Those men were Shawn Spears, Nick Gage (In a Death Match), Juventud Guerrera and Wardlow. Jericho would beat all five men, before losing to MJF as the fifth labour.

They would have one final match at All Out 2021, where Chris Jericho won the match to save his career. It was one of the longest and most intricate storylines in AEW, and will go down as one of the greatest feuds in AEW history.

Whilst this feud had one of the most disappointing endings, everything before that was simply pure gold. Jon Moxley was the long-time AEW Champion and one of the biggest stars in the company. He had defended his belt against all comers, including MJF, Brodie Lee and Eddie Kingston to name a few.

Kenny Omega had recently earned his shot at Brodie Lee by winning the AEW Eliminator Tournament. He defeated Adam Page in the final at AEW Full Gear 2020, as part of the long running feud between the two. The title match against Moxley was set for AEW Winter is Coming, on the same show as the surprise debut of the Iconic WCW wrestler Sting.

How old is AEW Wrestler Sting?

Omega, with the help on Don Callis, beat Moxley in an exciting match to become the third ever AEW Champion. The feud would not end here, however. The pair would battle again in the most extreme stipulation possible. Inspired by FMW and death match legend Atsushi Onita, Kenny Omega vs Jon Moxley would take place in an Exploding Barbed Wire Death Match.

The match itself was bonkers. Whenever each man hit the ropes (which were made of barbed wires), it let off an explosion. The ring was filled with weapons, and outside the ring where bared wire covered boards rigged with explosives themselves.

Omega won the bout, leaving Moxley to die in the ring as they awaited for the explosion. Eddie Kingston, former friend and rival of Moxley, ran down to the ring to shield his former friend from the blast. Except there was no explosion, and everyone involved looked stupid.

Did it ruin the match? A bit. It’s still a great match if you can ignore the lack of explosions. And the feud was one of the best in AEW, and will remain one to look back on for years to come.

Orange Cassidy came from out of nowhere to become one of the most popular wrestlers in AEW. It was his match with PAC at AEW Revolution 2020 that turned fans from indifferent to screaming his name, as he shoved his hands in his pockets and threw the smallest kicks possible.

While this match, one of the best AEW matches ever, introduced fans to how good Cassidy could be, his feud with Chris Jericho helped make him a main event star in the company. A feud that began with Cassidy simply walking through an Inner Circle backstage interview ended after three matches, with the final one being a brand new match-type – The Mimosa Mayhem Match.

Cassidy won two of our the three matches in the feud. He also took part in some memorable segments. The debate between Jericho and OC showed his personality and microphone skills, whilst the attack by the Inner Circle which led him standing on a table dripping with his own blood was an image that will last long in the memory.

Check out the Best Orange Cassidy matches in AEW

No story has taken over AEW as much as Kenny Omega vs Adam Page. From the first day in AEW, the destiny was for Adam Page to be crowned the AEW World Champion. The Elite saw it. Even NJPW’s Hiroshi Tanahashi saw it. During his time in New Japan, Tanahashi said in an interview about Page, “He is like nobody else. He’s too good for Bullet Club. Leave him to me, I’ll remove the poison inside him.”

Tanahashi was right. The Bullet Club became the Elite, the group that formed AEW. Inside this group was dissension, distrust and betrayal from both Hangman and the groups perspective. After a succesful year spent defending the AEW Tag Team Championships, Omega and the Young Bucks finally snapped, abandoning Hangman after he cost his side the gold.

Here they turned heel, and with the held of Don Callis and the Good Brothers, dominated AEW. Kenny Omega defeated Jon Moxley for the AEW Championship, while the Young Bucks beat FTR, the team that took the gold from Page and Omega, for the AEW Tag Team Championship. All this time, Page was locked in a storyline with The Dark Order, who were helping him deal with his anxiety, insecurities and feat to confront Kenny Omega and the Elite.

The feud took many twists and turns. It never went where you thought it would go. Everyone thought Page would return to beat Omega at All Out 2021. Instead, he left the promotion to focus on his wife who was giving birth to his child. He did finally return, won the Casino Ladder Match and earned the right to face Kenny Omega.

But this time, he was not scared. He gave an impassioned promo, showing how he had grown and was ready to face his fears. He even apologies to the Young Bucks for the way he treated them and the Elite. Then, he finally hit Omega with a Buckshot Lariat, pinning Omega and winning the AEW Championship. It was an emotional rollercoaster and expert storytelling, and by far the best storyline in AEW history.