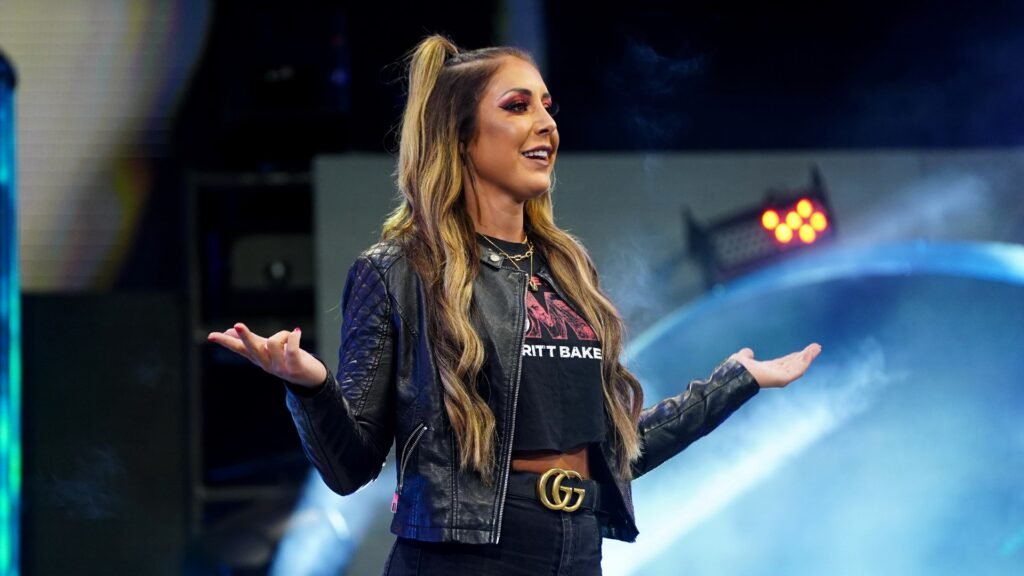 Since the star of AEW, Britt Baker has led the women’s division as the top female star in the company. Despite early struggles as a face, a heel turn and change in attitude soon turned the cocky dentist into one of the top heels in AEW.

Her match with Thunder Rosa at St Patricks Day Slam 2021 earned an incredible five star match rating, whilst the pair battled in a brutal match inside a steel cage one year later. In the meantime, she won the AEW Women’s Championship from Hikaru Shida, and held the belt for nearly a year before dropping it to Thunder Rosa in said-cage match.

Dr Britt Baker DMD has also been named by various wrestlers as the future of the company. While her boyfriend Adam Cole has had nothing but great things to say about her, WWE legend and AEW star CM Punk has called her one of the “four pillars” of AEW. In his mind, she has replaced MJF and joined Jungle Boy, Sammy Guevara and Darby Allin as the four wrestlers to lead AEW into the future.

Being one of the top performers in the company, it is no surprise that WWE are interested in signing Britt Baker once her AEW deal is up. A Britt Baker WWE debut would be huge news once her contract is up, following in the footsteps of Cody Rhodes as an AEW original signing for their competition.

Britt Baker has previously revealed that WWE were interested in signing her to a deal, but that she turned them down to sign for AEW. This was despite her partner Adam Cole being a champion in NXT, and most people would agree that she made the correct choice at the time.

However, the former AEW Women’s Champion doubled down on her refusal to sign for WWE in a recent interview. Speaking to Inside the Ropes Kenny McIntosh, Britt Baker revealed that she was courted by WWE, but that “you can’t trust that company“.

“I mean, exactly, I can’t disagree with you. They definitely expressed interest—unfortunately, I’ve got to pick and choose how I say this—but I just feel like you can’t trust anything with that company, whereas at AEW I’ve never been promised anything that didn’t follow through.“

“So it’s something that, unfortunately, it’s sad that it comes down to that, that it makes a company not really desirable because you can’t trust anything they say. And I know business is business, and I understand totally that’s what it is, but as a wrestler, business is business as well.” – SOURCE

Britt Baker looks set to stay in AEW for a long time. She has long been presented as a main event talent, recently main eventing AEW Dynamite in a steel cage match against Thunder Rosa for the AEW Women’s Championship. The dentist/wrestler has impressed everyone in the company with her work ethic and talent in the ring, and surely has an incredible career still ahead of her despite losing his long-coveted championship.

Has Britt Baker been in WWE?

Britt Baker has actually already in WWE. On 26th July 2016, she was announced as a “local competitor” to take on the dominating Nia Jax in a match on Monday Night Raw. The match only lasted less than a minute, and Baker was never given the chance to showcase her in-ring or microphone skills that have made her a household name in AEW.

She also appeared on camera at NXT WarGames 2019. She was in the crowd supporting her partner, Adam Cole, and was cut to during one portion of the match. At the time she was already employed by AEW, and WWE quickly apologised and revealed her appearance was a complete accident and not intentional.

Did you know that Britt Baker wrestled in WWE? Let us know in the comments or click below to keep reading