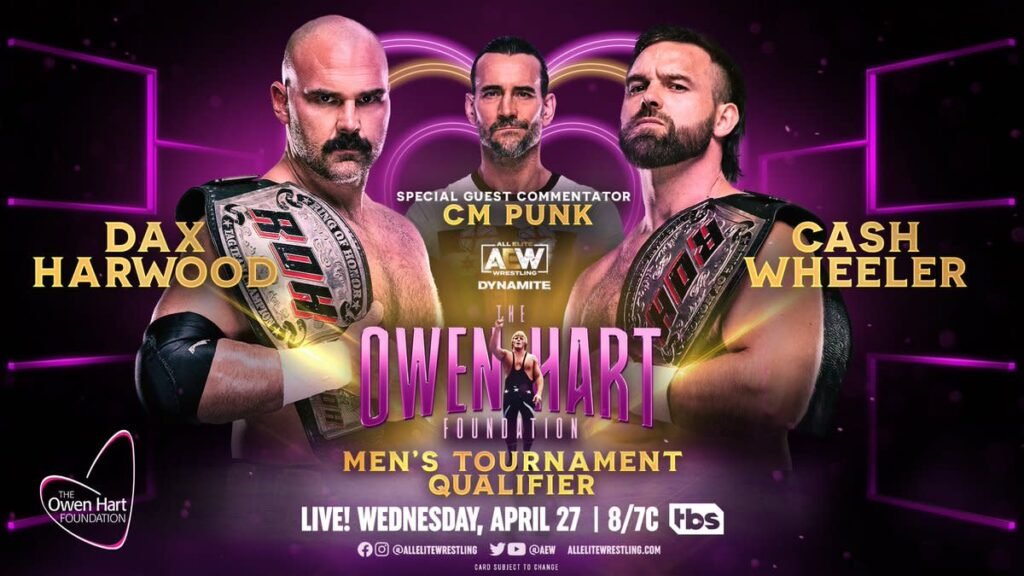 AEW Dynamite was opened this week by a dream match that most people didn’t realise that they wanted to see. FTR collided as Cash Wheeler vs Dax Harwood faced off in a qualifying match for the long-awaited Owen Hart Cup Tournament, with the winner earning a spot in the first round of the tournament.

The pair had never fought one-on-one before, having been tag team partners for 8 years since they joined WWE in 2014. They immediately found great chemistry together and made it their mission to bring back the classic tag team wrestling style of the 1980s, citing the likes of the Midnight Express and Midnight Express as inspirations for their style of wrestling.

The match between Dax Harwood and Cash Wheeler was only announced the week prior to their match, but was one of the most anticipated matches on AEW Dynamite since CM Punk vs MJF. Cash Wheeler vs Dax Harwood had never taken place, from NXT to WWE to AEW, but they finally battled each other this week on Dynamite, and paid homage to two of their favourite wrestlers of all time – Bret Hart and Owen Hart.

CM Punk sat at the commentary desk as Cash Wheeler vs Dax Harwood opened the April 27 edition of AEW Dynamite. All three men have been known admirers of Bret Hart, paying tribute to him both on social media, in press conferences, in promos and inside the ring. CM Punk’s debut match in AEW against Darby Allin was a clear tribute to Bret Hart vs X-Pac on an episode of Monday Night Raw.

The pair even worse trunks paying homage to The Hart Foundation, co-opting their logo for themselves. CM Punk also wore a Bret Hart hoodie on his way to the commentary desk. In a show of solidarity and something unheard of before, Cash Wheeler and Dax Harwood walked out to the ring together as one.

The match started as a friendly encounter between the two teammates. Harwood and Wheeler started with some fast paced grappling and reversals, a style of wrestling that were made famous by Owen Hart and Bret Hart in WWE. The good natured wrestling culminated in a smile and a handshake between the two FTR teammates, who were happy enough just to be involved in the Owen Hart Cup.

The pair knew every move the other would make, pulling off some incredible reversals that had the crowd popping huge. Cash Wheeler had the upper hand in the early part of the match, but Dax Harwood was not too far behind in the stakes.

However, the friendly rivalry would come to an end when Dax Harwood would accidently poke a thumb into the eye of Cash Wheeler. This caused Wheeler to snap, and the match got more physical from that point on. Huge moves like Superplex, powerbombs and pile drivers followed in an exciting and fast paced match.

The match between Cash Wheeler vs Dax Harwood ended when the duo reversed a number of pinfall attemps, but Harwood managed to sneak the three count and defeat his partner to make it to the next round of the Owen Hart Cup. Showing there were no hard feelings, the pair hugged after the match and walked out together in a terrific show of sportsmanship.

Dax Harwood joins Samoa Joe, Adam Cole, Kyle O’Reilly and four other yet to be decided entrants in the 8 man Owen Hart Tournament. The tournament will commence on May 1st 2022 and culminated at Double or Nothing 2022 later that month.

Who do you think will win the Owen Hart Cup? Did Cash Wheeler vs Dax Harwood live up to your expectations? Let us know in the comments or click below to read more.