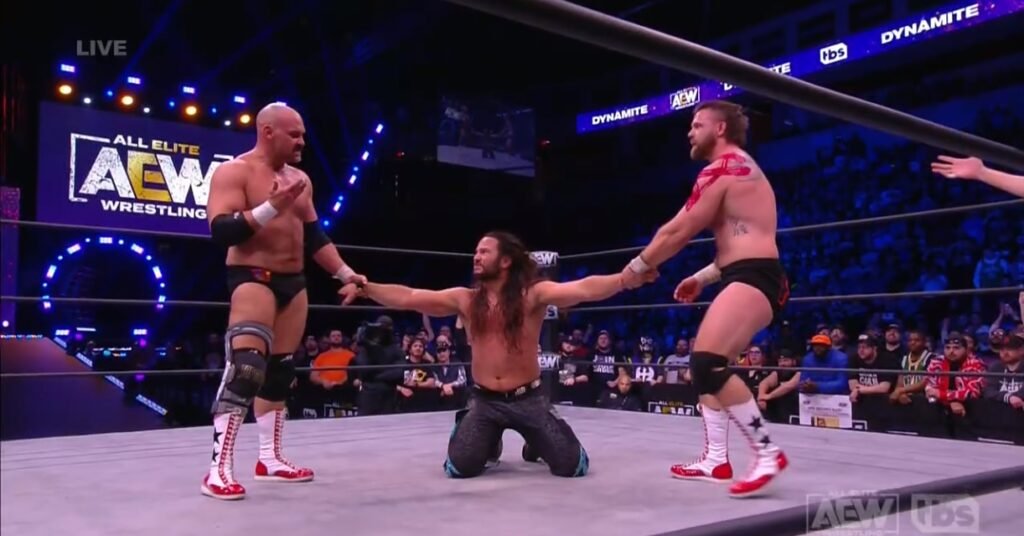 AEW Dynamite recently played host to FTR vs Young Bucks 2, the second instalment in the feud between two of AEW’s greatest ever tag team. Both of the matches that the duo had together were five star classics and showcased both teams distinct styles in the ring whilst also combining them together to create some of the best tag team matches of all time.

Whilst FTR vs Young Bucks 1 and 2 were considered instant classics in AEW, fans have already started to anticipate a third battle between the former AEW Tag Team Champions. The third FTR vs Young Bucks match could be one of the most anticipated matches in tag team wrestling history, and could rival the likes of Omega vs Okada and Flair vs Steamboat as one of the greatest wrestling trilogies of all time.

Even before Dax Harwood and Cash Wheeler debuted in AEW, the foundations for an FTR vs Young Bucks feud was being laid in the strangest of places – on the Young Bucks’ Youtube channel. On some episodes of Being the Elite, the likes of Cody Rhodes and the Young Bucks would proclaim “fuck the Revival (FTR’s WWE name), or FTR for short.

This helped the build up the match between FTR and the Young Bucks, who at this point were still wrestling for different companies. FTR responded on twitter multiple times, even emblazoning their gear with the FTR slogan inside a WWE ring. It seemed inevitable that the match would happen one day, especially when Cash Wheeler tweeted out saying “One day we’ll wrestle The Young Bucks & everyone will rejoice. Remember this Tweet.”

The Young Bucks tweeted out something similar about both FTR and The New Day, although only FTR had publicly asked for their WWE release and were openly unhappy about their treatment in the company.

It would another 2 years before FTR were released by WWE finally, on April 10, 2020. The duo of Dax Harwood and Cash Wheeler were released from their deals with WWE and as soon as their non-compete clause ended were straight on the phone to Tony Khan and signed to AEW as the hottest new tag team in the division.

It wouldn’t be long until FTR debuted on AEW Dynamite. They made their first appearance for AEW in May 2020, just a month after their WWE deals were terminated. The duo saved the Young Bucks from a beat down, referencing the four men’s past with each other and planting even more seeds for an eventual match.

The match featured the fallout of a multi-year angle between Omega and Page, but also set the stage for the first FTR vs Young Bucks match. Nick and Matt Jackson would challenge FTR, in front of no fans in the midst of Covid era, at Full Gear 2020 in one of the most anticipated tag team matches of all time.

The match featured exquisite in-ring action, only let down slightly by the lack of fans cheering on two of the best tag teams to ever live. The Young Bucks would eventually pin FTR to win the titles in a match that was rated a full five stars from Dave Meltzer, and heralded as one of the best tag team matches in AEW history.

FTR and the Young Bucks were kept apart for the best part of 18 months after their legendary encounter at Full Gear 2020. This lead fans to speculate that their was heat between the teams, especially as FTR teased retiring from AEW, and re-joining WWE, multiple times during their run as a heel tag team.

In the meantime, Young Bucks has a legendary tag team title reign that wasn’t ended until they clashed with the Lucha Bros inside a steel cage at All Out 2021. Meanwhile, FTR joined up with MJF, Wardlow and Shawn Spears, along with manager Tully Blanchard, as the menacing faction known as The Pinnacle.

The two teams were kept completely separate, until an FTR face turn in early 2022 caused them to dump Blanchard and finally lay down the challenge to their long-time rivals on the April 6 2022 edition of AEW Dynamite.

The match was one of the most hyped rematches in AEW history and more than lived up to it. In an epic encounter that blew the first bout away, this time with the roles reversed with FTR as the faces and the Young Bucks as the heels, FTR took back a win against their rivals with a BTE trigger followed by a Big Rig to pin Matt Jackson to win the bout. This evened the score up to 1 win apiece, setting up a blockbuster third match between FTR vs Young Bucks.

When and where this match will take place is unknown. FTR are currently on their best run yet, and are set to face off with each other in the Owen Hart Cup. If they carry on their win streak and win the AEW Tag Team titles for the second time, I fully expect to see Young Bucks vs FTR main eventing an AEW Pay per view for the tag team championships, in what would make the feud one of the greatest wrestling trilogies of all time.

What did you think of FTR vs The Young Bucks? Let us know in the comments or click below to read more