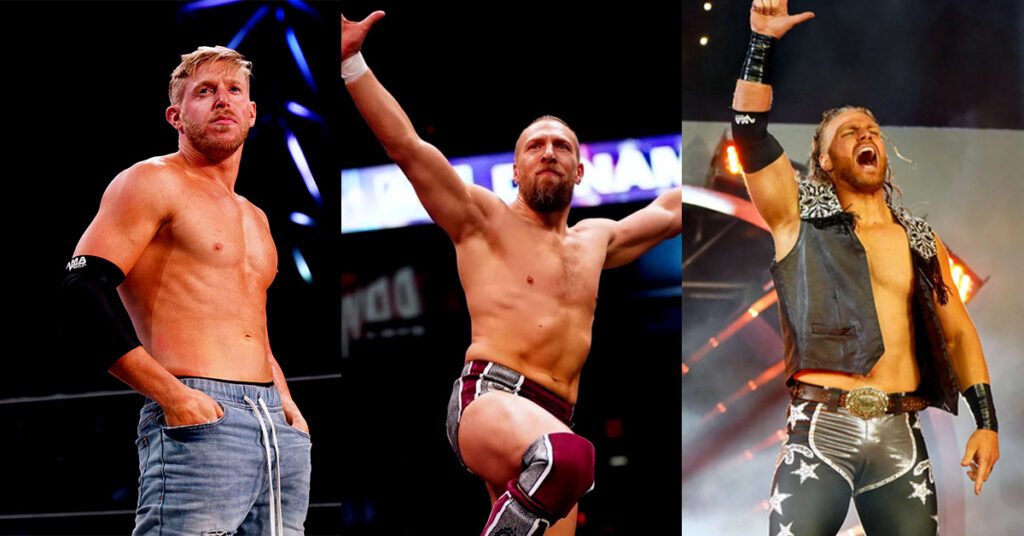 Some of the best wrestlers in the world have flocked to AEW, to prove themselves as the best.

Kenny Omega, Bryan Danielson and Adam Cole are but a few of the incredible wrestlers who have graced the All Elite Wrestling ring.

But some of the best matches in the companies history have come from unlikely sources. You’d be surprised if before you heard about AEW, I said the likes of Chuck Taylor and Britt Baker were outworking Chris Jericho and CM Punk.

Obviously I’m being slightly facetious, but those two wrestlers have a spot on this list alongside other great talent, like the Lucha Brothers and PAC.

Here is a list of the top 10 best matches in the history of AEW.

This match is a personal favourite of mine, and a five star match for me.

Orange Cassidy vs PAC had one week of build, and had very little story going into the match. However, the pair had such great characters that it made the perfect match.

Orange Cassidy, the King of Sloth style, utilised his “not trying” style in the ring, much to the chagrin of PAC.

The Englishman, formerly called Adrian Neville in NXT, tried to beat the shit out of Orange Cassidy, but he didn’t-try so well that he managed to avoid his attacks. PAC was one of the best WWE wrestlers on the roster before he left, and showed himself as top of AEW too with this match.

Many interferences later, PAC pins Cassidy for the win, but it was a star making performance for Orange Cassidy.

Both men remain huge stars in AEW, and this was one of the matches that made me take notice of the pair.

The pair crossed paths again at Double or Nothing 2021, facing Kenny Omega in a triple threat match for the AEW World Championship.

The only women’s match on the list, but one that made Britt Baker and Thunder Rosa into stars in AEW.

This brutal encounter between the Dentist the crazy skeleton lady was one of the best AEW matches ever.

It was by far the best AEW women’s matches since the companies inception.

It was a “lights-out” match. It’s a concept created by AEW, where a grudge match can take place irrespective of the rankings.

This means that, even thought Thunder Rosa picked up the win, she did not advance any higher in the AEW Women’s World Championship rankings.

The match was brutal. Kendo sticks, chairs, tables and even thumbtacks were beat down their opponents.

The lasting image of Britt Baker, smiling as she licks her own blood from her lips is everlasting. It even became a best-selling t-shirt.

The brutality of this match is one that hadn’t been seen before in the AEW Women’s division. It was the best Lights Out match the company ever produced, beating out Jon Moxley vs Kenny Omega, which did not make this list.

One of the early “dream matches” in AEW turned out to be once of the best.

Just before the incredible tag team match agains the Young Bucks at AEW Revolution, Kenny Omega had a score to settle. He faced nemesis PAC, who he had been feuding with since the start of AEW.

The match, from an in-ring standpoint, was one of the best at that point of AEW. The two men were at the top of their game, and truly earned their spot on the list of AEW best matches.

PAC did what no-one else had tried, but what all fans had wanted to see. He cost himself a fall by hitting Omega with a chair. However, he used the injuries sustained by Kenny Omega to win the next fall himself.

Both men fought valiantly, but the matched one fall each. Both men surely have another round in them, and I look forward to the future bout.

This match from the Brodie Lee tribute show was not just a great match, but an emotional affair.

Brodie Lee, formerly Luke Harper in WWE, passed away on December 26, 2020. He was the leader of the Dark Order in AEW, and a former TNT Champion. (click here to read about Brodie Lee Best Matches).

The match was less about the in-ring action than it was the emotion. The whole show was booked by Brodie Lee’s son, Brodie Jr. He picked his favourites to team together, which gave us Hangman Adam Page and the Dark Order.

All the men in this match were visibly crying before the match (except MJF the bastard). It’s definitely one to go and watch, as well as the whole show. The Brodie Lee memorial episode may be the best in AEW history, and this match makes it.

6. Inner Circle vs The Elite – Stadium Stampede – AEW Double or Nothing 2020

This match main evented Double or Nothing 2020 over Jon Moxley vs Brodie Lee. That left it with pretty big boots to fill, and it did so in spades.

The match was fun. It was ridiculous, it was hilarious, it was simply fun. You had Matt Hardy being reincarnated in former gimmicks as he’s dumped in a swimming pool. You had Chris Jericho pretending to be a witch with a cone on his head. It even had Matt Jackson suplexing someone the entire length of the pitch. It was simply fun.

The match also ended with a ridiculous One Winged Angel off the stand through a table, slamming Sammy Guevara 30 feet in the air.

It’s long, but it is incredible. It is much better than the second Stadium Stampede, between the Inner Circle and the Pinnacle.

I have previously reviewed this match before. Click on Best Friends vs Santana and Ortiz to read that.

This match was originally scheduled to take place earlier in the year, but a pandemic forced it be cancelled.

The story going into this match was simple, and oddly fitting of the Best Friends. Santana and Ortiz had wrecked Trent’s mums minivan, which she used to drive the pair to the ring in occasionally. The best friends therefore needed to get revenge, and did so in a stipulation befitting of PnP’s crime – a parking lot brawl.

The match received five stars from Dave Meltzer, and I can see why. It had hard hitting action, brutal bumps into car windscreens, and numerous weapons being utilised. All four men came out bloodied and battered, and the blood really added to the match.

The highlight of the match came as a car boot opened to reveal a prone Orange Cassidy. He leapt from the boot to punch their foes, ultimately helping the Best Friends to win the match.

Match number four in the best AEW matches of all time was one of the first in the companies history. Brothers Cody and Dustin Rhodes fought at AEW Double or Nothing, and was the first match in AEW to get five stars from Dave Meltzer.

The match was announced with little story, but the brothers built the feud themselves through self contained promos and interviews. When the match did occur, fans were dying to see the pair lock horns again.

Cody and Dustin had wrestled once before, at Fastlane 2016 in WWE. The match took place in front of their late father Dusty Rhodes, but they botched the ending and were taken off Wrestlemania that year.

I have previously reviewed this match before. Click on Best Friends vs Santana and Ortiz to read that.

This match was originally scheduled to take place earlier in the year, but a pandemic forced it be cancelled.

The story going into this match was simple, and oddly fitting of the Best Friends. Santana and Ortiz had wrecked Trent’s mums minivan, which she used to drive the pair to the ring in occasionally. The best friends therefore needed to get revenge, and did so in a stipulation befitting of PnP’s crime – a parking lot brawl.

The match received five stars from Dave Meltzer, and I can see why. It had hard hitting action, brutal bumps into car windscreens, and numerous weapons being utilised. All four men came out bloodied and battered, and the blood really added to the match.

The highlight of the match came as a car boot opened to reveal a prone Orange Cassidy. He leapt from the boot to punch their foes, ultimately helping the Best Friends to win the match.PAGE BREAK

This iconic cage match from AEW All Out 2021 came so, so close to topping the list. It narrowly missed out on being the best tag team match on the list, but it is really a toss up between this and the next entry.

The two sets of brothers had an incredible match, confined to a steel cage surrounding the ring. The four men spent 22 short minutes completely destroying each other with destructive results.

One highlight was Matt Jackson kicking Penta and Rey Fenix with a shoe with thumbtacks stuck to the bottom of it. It looked like some ridiculous medieval torture device, and absolutely tore Penta El Zero M’s face to absolute fuck.

The wrestlers didn’t stop for the entire 22 minutes. It was a fast paced, all-action thrill ride that needs to be seen to be believed. It is well worth watching this match in it’s entirety, or else you will not believe anything you have read about this match.

The second best AEW match in history is the historic match between Adam Page & Kenny Omega and the Young Bucks.

The two teams were all part of the same faction, The Elite, but had fallen into some disagreements in recent times. Hangman Adam Page felt isolated by the Elite, and wanted out of the group.

The Young Bucks refused and wouldn’t let him leave, which caused heavy arguments.

Kenny Omega was the man in the middle, trying to keep the peace between his while also trying to keep hold of the AEW Tag Team Championships. This led to an explosion of emotions, where both teams gave it their all to try and defeat, both physically and mentally, the other team in the ring at AEW revolution.

The match was an instant classic, combining supreme in ring work with extraordinary storytelling and emotion.

Bryan Danielson vs Kenny Omega is the best AEW match ever. “The American Dragon” Bryan Danielson entered AEW and in his first match completely blew everybody away.

Both men performed exceptionally, but you could tell they pulled back in some instances, to save for the inevitable rematch. Usually that would make it a lesser match, but it doesn’t.

Bryan Danielson sold masterfully, in multiple instances making me think the match would be thrown out due to injury.

The match ended as a time limit draw after thirty minutes. While it was disappointing, it did leave both men looking great and showed that they both had more to give for a potential rematch.

For my money, there is no better match in American since I started watching wrestling. Bravo, Omega and Danielson. 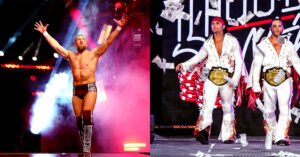