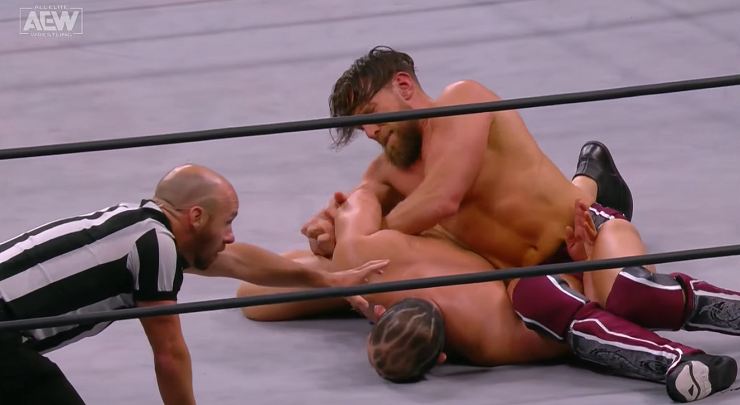 Bryan Danielson has claimed that he has taken inspiration from Japanese legends Minoru Suzuki and Yugi Nagata in a bid to extend his wrestling career, in a recent interview.

Bryan Danielson wrestled Minoru Suzuki on the AEW Rampage Buy-In show in October in a physical, hard-hitting match that wowed crowds that gained a 4.75 star rating from Dave Meltzer. That match featured very, very few bumps and showcased both men’s technical skills and incredible striking ability as opposed to the fast-paced and high risk matches that Danielson was more famous for in his run in WWE.

Since joining AEW, the American Dragon has wrestled a physically demanding style of match. He has taken some incredible bumps, like dragon suplexes, top rope moves and even huge running V-Triggers from Kenny Omega. He has taken bumps he would never be allowed to in WWE, and has worried fans with falls onto his head and neck, which had previously caused him to retire from wrestling in 2016.

The American Dragon has also noted that once his current deal with AEW expires, he wants to stop his full time wrestling career. Whilst that does mean that he may not be wrestling each week on AEW Dynamite (or WWE for that matter), it does not mean that he will be retiring for good. It looks likely that he would want to wrestle “part-time”, as other wrestlers like Brock Lesnar do.

However, Bryan Danielson did admit that his mind could be swayed toward the end of his deal. He is having the best run of his career and has previously confessed that he is having the most fun of his career so far. Now he is couple up with one of his best friends and mentors William Regal, he may be convinced to extend his AEW stay beyond it’s initial three-year timeframe.

During his appearance on Wrestling Observer Radio, Bryan Danielson spoke about how he did not want to wrestle as a full-time performer once his current deal is up. However, he did speak about how he wanted to continue wrestling for “a long period of time” and had to look after his body in order to do so.

“We’re all being smarter with our training and technology and health and the health profession is better,” said Danielson.

The former WWE Champion revealed on the show that he has taken inspiration from Japanese legends like Minoru Suzuki and Yugi Nagata in order to prolong his wrestling career. He has committed to emulating their hard-hitting but light-bumping style in order keep him healthy enough to raise his children in the way he wants while always perfecting his art inside the ring.

“One of the things I think too is, I am changing my wrestling style a little bit to be more like Nagata and Minoru Suzuki as opposed to bigger bumps and that sort of thing. The heavier bump taking style, you’re less likely to have a long career with that as opposed to a hard-hitting style where Nagata will be in hard-hitting wars, but he’s not doing necessarily the top rope dragon suplexes and that stuff, which is the stuff that potentially….when you talk to Edge, it’s those ladder matches and big things that may have taken years off his career. That’s what I’m looking at now, from a longevity perspective, but also from a perspective of, when my son is 15 years old, I’m going to be 55 and I want to be able to do all the things you do with a teenager if he wants to play baseball or wrestle, I want to be able to roughhouse with him,”

Bryan Danielson the said how Tom Brady, Lebron James and former WWE colleague John Cena inspired him to invest in himself and his own body in order to keep himself in shape and wrestling for as long as he could.

“My dad was not that old and able to do those things. I don’t want my shoulders blown out so I can’t throw a ball when they want to play baseball. I also look at people like Tom Brady and LeBron James. Tom Brady, the work he’s put in, LeBron James, he came out and said he spends a million dollars on his body every year just so he can continue to play basketball at the highest level.“

“That was a light switch that went off in my head because I’m a frugal human being who doesn’t like to spend money on anything and almost considered it a point of pride. When I heard him say that, it made so much sense to me.

“John Cena had mentioned, not to me, he just said it, he got the bus, not because ‘I’m a superstar, I should be in a bus.’ He got it so he could sleep better because that was the only way he could continue doing what he does. I, in no way, shape, or form need a bus, but spending money on my body is something that I only recently, the last year and a half, two years, is something that I really invested in.” Transcription by Fightful

Bryan Danielson was recently described by William Regal as “The Perfect Wrestler“. His long time friend gushed about the American dragon during his debut AEW promo, and I’m sure both Regal and all the AEW fans will hope to see Danielson for as long as possible.

He is one of the greatest wrestlers of all time and we are blessed to see an all-time great wrestling weekly on AEW Dynamite.