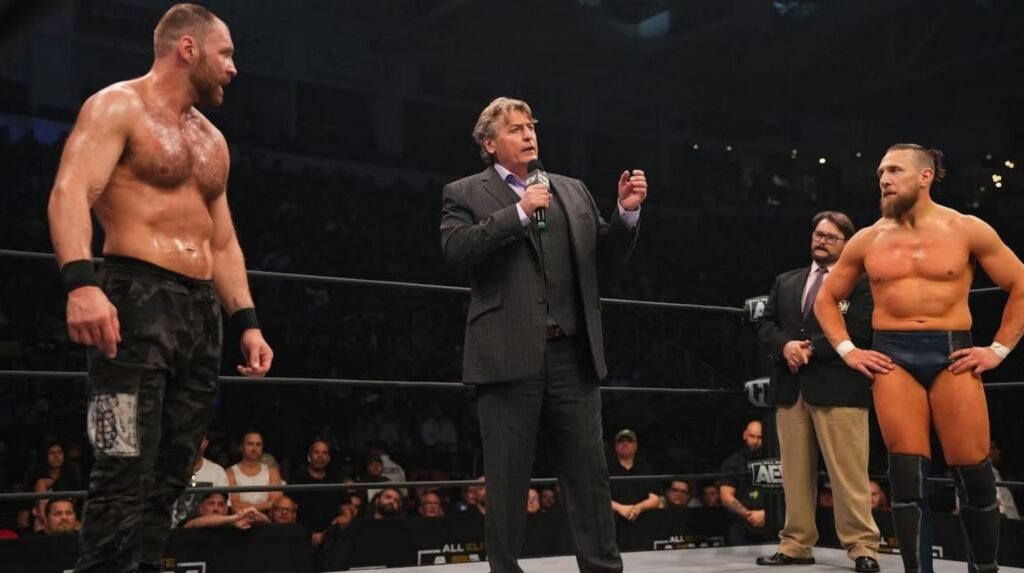 William Regal made his AEW debut at AEW Revolution 2022, breaking up a brawl between Bryan Danielson and Jon Moxley and uniting them with himself as a faction. It was a huge moment as the 53 year old was one of the most beloved wrestlers today and inspired a generation of young wrestlers.

Regal was the head trainer and general manager of NXT and Triple H’s right hand man in the promotion. However, after Triple H suffered a cardiac event which forced him to retire, Vince McMahon and Nick Khan shook up NXT and fired William Regal on the 5th January 2022, ending 22 successful years with the company.

During the start of his tenure with the company, William Regal and Bryan Danielson became fast friends. Meeting in MCW (Where William Regal did NOT train Bryan Danielson), the pair became great friends and trained together regularly for hours and hours after practice in the WWE developmental promotion.

Eventually, Regal was pulled up to the main roster and Bryan Danielson was let go from his contract, the pairs relationship continued to blossom. Regal put in a good word wherever he could to help the American Dragon get bookings across the world, and Danielson never refrained from heaping praise on his English mentor and one of the best British wrestlers of all time.

His gushing of support for Bryan Danielson continued as William Regal cut his first ever AEW Dynamite promo. The former King of the Ring winner was interview by Tony Schiavone after Danielson and partner Jon Moxley defeated JD Drake and Anthony Henry (AEW tag team debuting as the Workhorsemen) in a tag team match.

Bryan Danielson is the perfect wrestler

“Whether you know this or not, the only reason that you know me, probably from 20 years ago if you’re a fan, is because of this young man (Bryan Danielson) because every time his name was mentioned whether it be on Ring of Honor or any other company around the world.

“My name got mentioned with him and so it made a young group of wrestlers realize that as much of a rogue that I am and that’s when, I get to you in a minute because i’m riddled with riddled with it (Regal says, gesturing to Tony Schiavone) you know that Tony, riddled with it to the core.”

“But as much of a rogue that I am, what I will do if somebody wants to work hard is make them a better professional wrestler. The first thing I will do is, which I did to this young man, is sit him down and tell him everything not what to do, and that will save him ten years of his career.”

“This is the wrestler that I should have been. Bryan Danielson is the perfect wrestler. There was a time when we spent time together where we would train in the ring with a group of people and then they would leave and then he would stay with me and we would stay from, I don’t know three or three or four o’clock in the afternoon until past midnight every single night for five months and we learnt.”

“And that’s when we really learned and for the next whatever amount of years, I sent you to different places or mentioned you or what does it matter you became everything that I could never be, because you don’t have the problems that I have.”

“11 years ago i met you and for a whole year the psychological and physical problems that we put upon each other would make the devil cry. So, when I knew that you two were going to  knock the stuffing out of each other on Sunday, I thought it was time to come along because you’re men and you did it the right way. In the ring.

“I thought I’d seen enough and so I came out and I thought what better could this younger generation of wrestlers have than the perfect combination.”

“the perfect wrestler (Bryan Danielson) and the perfect and utter sadistic person that will take things to a completely other level (Jon Moxley) and so that’s why this team is together.”

“And just a warning to every single person that steps in the ring with them. You will not like the outcome and you either will step up or you’ll get stepped on.”

Bryan Danielson was visibly pleased as Regal laid out why he was the perfect wrestler, and educated the fans on their history together and how their friendship began in Memphis Championship Wrestling in the year 2000.

Bryan Danielson is the perfect wrester, William Regal claims. It is high praise and a huge claim, but one that could be the closest to the truth than has been said to any wrestler before it. Never has a wrestler been such an expert in every facet of the art of wrestling. He is an expert in the ring in all it’s forms and is a master on the microphone too.

It’s a gift we get too see Bryan Danielson in his prime on AEW each week, doing what he loves – kicking peoples heads in.

William Regal thinks that Bryan Danielson is the perfect wrestler – do you agree? Let us know in the comments or click below to keep reading.