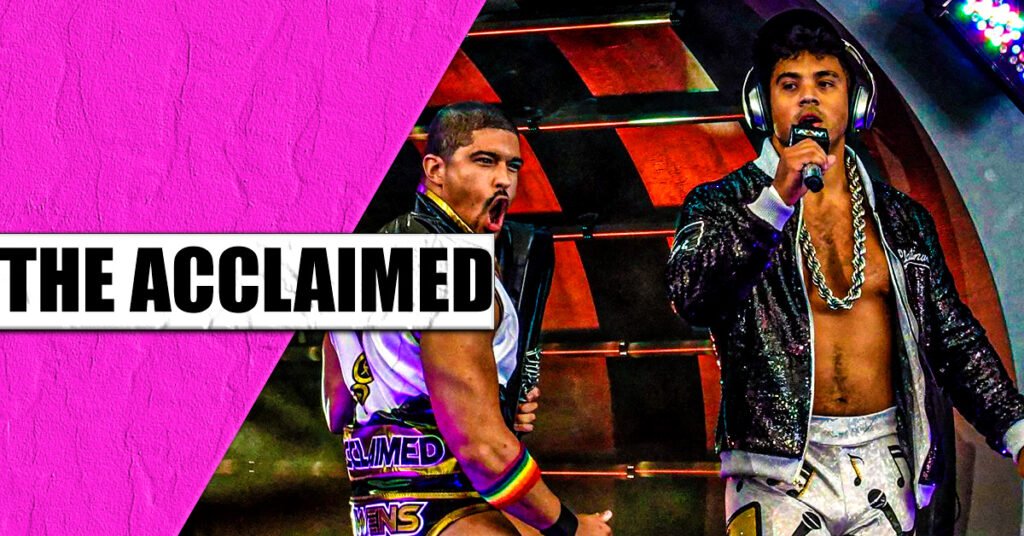 The Acclaimed currently sit atop the AEW Tag Team rankings. The duo of Anthony Bowens and “Platinum” Max Caster have wowed fans with some huge in ring victories, as well as their hilariously entertaining pre-match antics. Their raps, done by Max Caster, sometimes get them in trouble but quickly became the most entertaining part of whatever show they are on. In my view, the Acclaimed will be the next AEW Tag Team Champions. Here’s why;

The Acclaimed have arrived!

Just over a year after the duo first debuted their tag team, Max Caster and Anthony Bowens are the number one ranked tag team in all of AEW. They boast victories against some AEW’s hottest tag teams, like the Dark Order, Bear Country and even former tag team champions The Lucha Brothers.

In 2021, they even managed to achieve an incredible feat. Out of all the tag teams in AEW, they had the most wins out of any of them. Whether they fought on Dark, Dynamite, Rampage or live on pay per view, The Acclaimed were an unstoppable force.

While their in-ring matches have been solid, it is their outside of the ring antics that have endeared themselves to the fans. In particular, “Platinum” Max Caster’s raps have become the highlight of AEW. Before each match, the duo come out and Caster runs down his opponents with some hilarious and sometimes brutal rap disses. As well as this, he references current newsworthy items and current controversies, including but not limited to politicians, COVID and Space Jam.

While Caster is the master on the mic, Bowens as “the five tool player” has shown great promise inside the ring. As one half of the tag team most of his matches have been tag matches, but late last year he was given a number of singles matches in AEW to hone his skills and show the fans how good he really was.

One of these matches he was given was against one of the best of all time, Bryan Danielson. Voted as our Wrestler of the Year, It’s hard for Danielson to have a bad match. However, Bowens more than held his own against the American Dragon and performed excellently in a losing effort. He showcased his fantastic in-ring ability and made me think he could have a singles run in the future, should he and Caster decide to go their separate ways.

Jungle Boy and Luchasaurus recently won the AEW Tag Team Championships. They beat The Lucha Brothers on the first AEW Rampage of 2022, after a horrific Rey Fenix injury toward the end of the match. It was the first time that one of the “Four Pillars” of AEW had won a tag team championship, with Sammy Guevara and Darby Allin winning the TNT Championship, while MJF only holds the Dynamite Diamond Ring, with Diamond Dallas Page gifted him.

With Jurassic Express now holding the tag team gold, there has never been a better chance for The Acclaimed to win tag team gold. They have showed in the past year that they are one of the most dominant teams in AEW. Caster and Bowens have beaten some of the best teams in AEW, including Eddie Kingston, Santana & Ortiz and The Lucha Brothers in a ten man tag team match.

Beating teams of that talent is an impressive feat. I see no reason that The Acclaimed can’t beat Jungle Boy and Luchasaurus, especially with Marko Stunt set to be fired from AEW, and show that everyone really does love the Acclaimed.