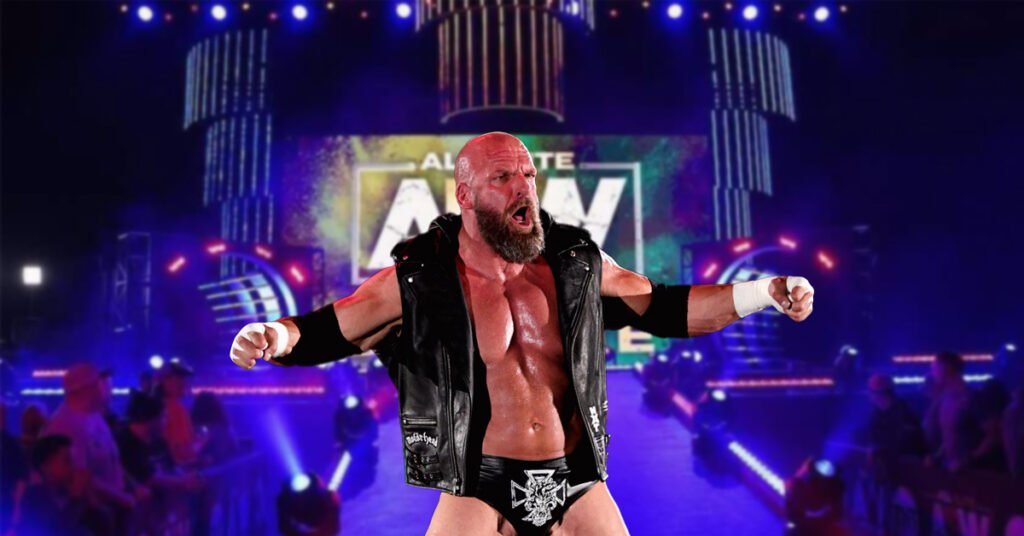 With the recent release of multiple NXT talents, the questions is there to be pondered – will Triple H leave WWE to go AEW?

It’s an interesting question. Triple H seemed like a WWE-lifer. He married into the McMahon family, wedding Stephanie McMahon in 2003 after years at the top of WWE. He won 14 World Championship in WWE, and has been a main event talent in the company ever since the Attitude Era. Triple H is one of the companies biggest ever stars and seeing him anywhere else would be like seeing John Cena wrestle elsewhere.

But John Cena never had his work gutted and destroyed right in front of his eyes. Certainly not whilst he was recovering from a major cardiac event that required surgery. In recent months, a number of the best and brightest in NXT have had their contracts terminated, but in recent weeks it has seemed more of a personal slight toward The Game than budget cuts.

In recent months, NXT has lost some of it’s top wrestlers. Adam Cole, Kyle O’Reilly, Bobby Fish and Johnny Gargano are just the tip of the iceberg. While three of those men have made the move to AEW, substantial rumours state that Gargano could follow them to AEW in the new year. These reflect some of the main projects Triple H had in NXT, and to see the fruits of his labour being utilised in NXT must be a kick in the teeth.

And it’s not just in-ring talent that has been gutted. Some of Triple H’s right hand men were recently sacked off by NXT, in the name of improving the idea of “NXT 2.0”. While Bron Breakker has become a real star under new regime, it has undermined the last 10 years of work Triple H has put into the yellow brand.

The biggest kick in the teeth, however, will have been the recent cuts from this week. It was announced that a number of personnel had been released from their deals, including some of the Game’s right hand men. The biggest one being the legendary British grappler William Regal. Regal has been head trainer in NXT for some time, and each and every NXT talent to come through has spoken at length about how much he helped their career.

Regal was also the top scout in NXT, and has been attributed to having discovered more talent for the brand than any other. You can see on Twitter this morning the amount of tributes being paid to Regal after his firing, including from top WWE stars like Becky Lynch and Kevin Owens.

With Regal gone, along with other Triple H-loyalists like Road Dogg and Ryan Katz, WWE seem to be taking power away from Triple H. With the disastrous “Wednesday Night Wars” where NXT failed to put AEW out of business, Vince seemed to have lost faith in his son-in-law, and decided to decimate the developmental promotion he holds so dear.

If he was not married to Stephanie McMahon, there is little doubt that Triple H would be next on the chopping block. However, there is no saying that he will simply stay in WWE and take the disrespect. He could quite, like Shane McMahon did in 2009, and start his own promotion. Or even we could see Triple H leave WWE and join their biggest rivals, All Elite Wrestling, or AEW.

Little is known about the Game’s current condition. With such a traumatic event as a cardiac arrest, it’s quite possible that Triple H’s in ring career is done for. However, if Triple H joins AEW then they have other ways of making use of his incredible talent.

Other legends who can no longer wrestle have done well in AEW. Legends like Jake Roberts, Tully Blanchard and Arn Anderson have reintroduced themselves to a new generation as managers for younger talent, to help them get over with the crowd with their help and experience.

Triple H, if he cannot wrestle, would be an incredible manager on-screen. He has shown in his 20+ years in WWE that he is excellent on the microphone, and without complete creative control, will be less likely to ramble on for twenty minutes not saying anything. He shows an intensity that few can, although his huge presence could overshadow whoever he was managing.

An idea could be having his own stable of former NXT stars, leading them in a sort of quasi-invasion of AEW. With former NXT stars like Undisputed Era, Malakai Black, Andrade, Tay Conti and FTR just some of the former NXT stars in AEW, it would not hard to create a “Black and Gold” stable for the Game to lead in AEW.

If he can wrestle, then there’s a number of dream matches in AEW. Triple H vs Kenny Omega, or Triple H vs Adam Page are just two first time matchups fans would love to see. Rematches with Bryan Danielson and maybe even CM Punk would also make big money, although getting CM Punk to agree to such a thing would an issue, even if Triple H could wrestle.

It’s unlikely Triple H leaves WWE for AEW, in all honesty. And I would rather see him try to form his own promotion rather than simply work for AEW. But imaging the possibilities of Triple H in AEW does make one excited. He would be a huge get for Tony Khan and could be AEW’s version of Hulk Hogan jumping ship to WCW, albeit slightly less exciting if he can’t wrestle.

Is Triple H Retired? We look at whether or not the Game can wrestle again in WWE.