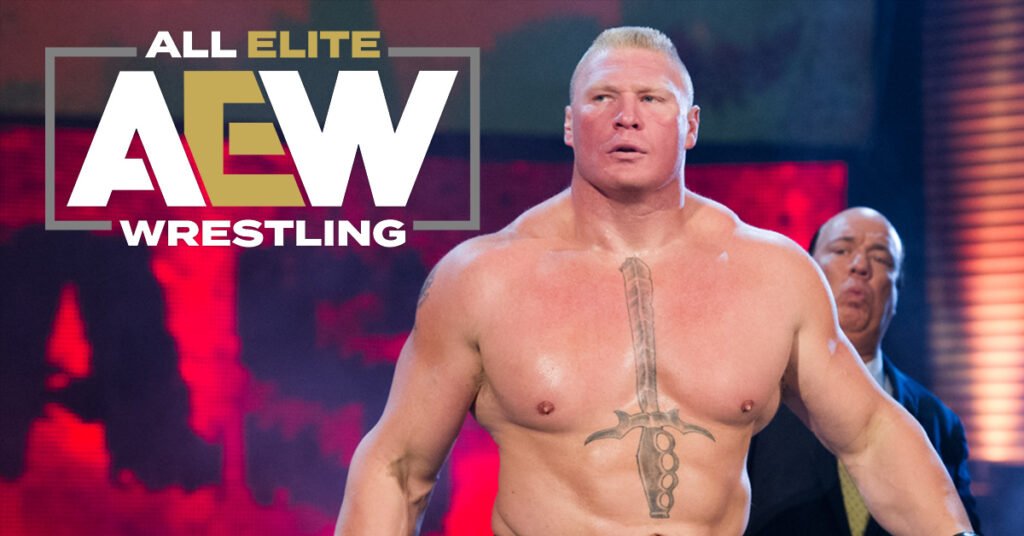 Could we see Brock Lesnar to AEW in 2022? Will the Beast leave WWE to join AEW to take on the likes of CM Punk, Bryan Danielson and Kenny Omega?

However, Brock Lesnar is a businessman. While it’s clear he has a love for the business, he knows his worth. He will do what he does best for the most money possible. If AEW can pay WWE more than that then there’s a chance he could move to AEW in the coming years.

With the rise of AEW in recent years, there is a chance we could see Lesnar leave the WWE to join AEW. Brock Lesnar to AEW would be only the latest in a long line of stars leaving WWE to join AEW. If Brock Lesnar were to move from WWE to AEW, he would follow other top WWE stars like Bryan Danielson, CM Punk and Chris Jericho among a host of others.

Recent reports have indicated that Brock Lesnar’s contract will last until next years Wrestlemania 39. If we were to see Brock Lesnar to AEW, it would have to be in 2023 after Wrestlemania. This could mean a Double or Nothing 2023 debut for Brock Lesnar, or even later at All Out 2023.

Brock Lesnar is set to face Roman Reigns in the main event of Wrestlemania 38, with the rumours indicating it will be a Champion-vs-Champion match. It is likely Lesnar will defeat Reigns for the Universal Championship, ending his nearly two year long reign in the process.

AJ Styles to AEW? Click to find out more

Whether or not Brock Lesnar to AEW is even possible, it’s hard to deny the impact AEW has had over the past three years. It has grown from what some called a “T-Shirt Company” and has grown to the second biggest wrestling promotion in the world.

AEW Dynamite regularly pulls in over a million viewers a week, not to far off the ratings WWE managed with Monday Night Raw. With a new deal with TBS recently inked, as well as a second show in AEW Rampage, AEW definitely have the money to pay Brock Lesnar’s multi-million dollar contract if they wanted to sign Brock Lesnar.

Brock Lesnar would bring a huge amount of star power to AEW. While they have a number of stars like Chris Jericho and CM Punk, none of them have the draw of the fans like Brock Lesnar. Lesnar has been a star in WWE and UFC for 20 years and it still on the top of his game.

When he puts in the effort, Brock Lesnar can have some amazing matches. He showed in WWE, when he faced the best worked like Bryan Danielson and CM Punk. With both men already in AEW, Brock Lesnar to AEW could produce some of the best AEW matches we’ve ever seen.

There are a number of wrestlers who would be a dream match for fans to face Brock Lesnar in AEW.

Kenny Omega vs Brock Lesnar would pit the top stars of WWE and AEW against each other in an incredible match. It would be worth seeing Brock Lesnar to AEW just to see this match alone. Add in the fact both men are former IWGP Heavyweight Champions then the stakes for this match go even higher.

A rematch between Brock Lesnar and Jon Moxley would also be great. They faced off at Wrestlemania 32 in a disappointing hardcore match, so it would be good to see them battle again in a stipulation match. A Texas Deathmatch would ideal.

Brock Lesnar vs Brian Cage is a match that could take place in either company. With Brian Cage WWE rumours swirling, even if Brock Lesnar does stay with WWE, we could be seeing these two monsters battling it out very, very soon.

Do you want to see Brock Lesnar to AEW? Should he stay in WWE or move to AEW? Let us know in the comments what you think, or click next article to read more.