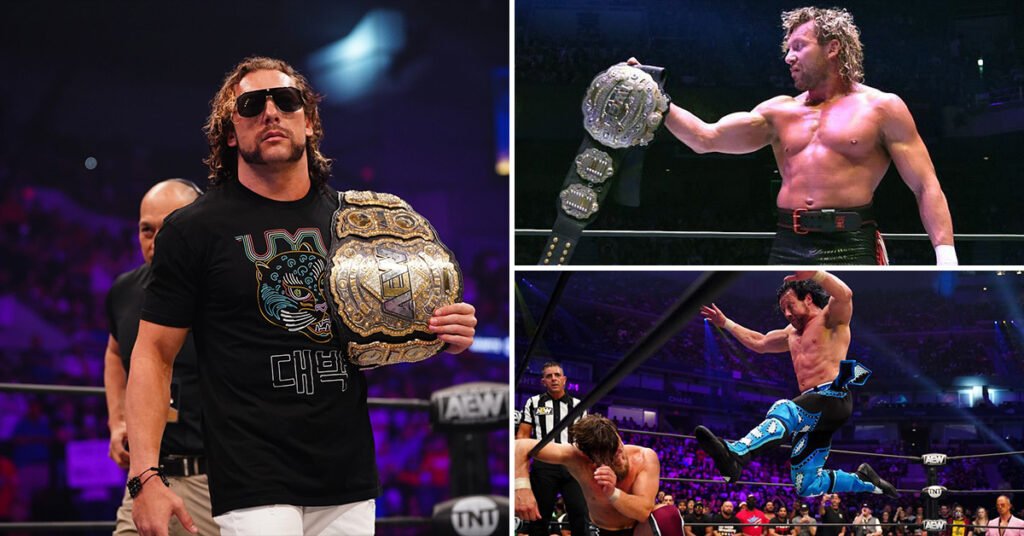 One of the best wrestlers in the world is AEW’s own Kenny Omega. The Canadian wrestler was born Tyson Smith but has gained worldwide fame as “The Cleaner” Kenny Omega. Under that name, he took the wrestling world by storm, showcasing his talents in Canada, Japan and finally in the United States with the likes of IMPACT, Ring of Honor and All Elite Wrestling.

Whilst in Japan he proved himself to be one of the best wrestlers in the world. He had fantastic matches whenever he stepped in the ring and could make anybody look like a star just by wrestling him.

In particular, Omega forged a rivalry with Kazuchika Okada which took over the world. The pair wrestled four times, each time better and more epic than the last. Their last encounter even earned a seven-star rating from Dave Meltzer, shattering the five-star scale.

He became famous working for New Japan, but earned celebrity status in America as a wrestler and Executive Vice-President in AEW. Along with his fellow The Elite members and Tony Khan, he started AEW and has helped launch it into the best wrestling promotion in the United States.

However, everyone knows this about The Best Bout Machine. It’s all common knowledge. Instead, let me tell you 10 surprising facts about Kenny Omega that you didn’t know about the former IWGP, AEW and IMPACT World Heavyweight Champion.

The first of the Kenny Omega facts is one many people did not know, and it’s about his time in WWE.

Despite being one of the greatest wrestlers in the world during his time in AEW and NJPW, Kenny Omega was called the best wrestler to not wrestle in WWE.

However, that is not strictly true. The first of the Kenny Omega facts state that Kenny Omega did wrestle for the WWE, but it was a different time in the career of the future best bout machine. He was signed to a WWE developmental deal in 2005 and was sent to Deep South Wrestling for training.

However, Omega struggled in the WWE system. He was not yet to the confident worker he is now, and struggled to fit in in the clique-filled, gossipy world of the WWE. He particularly struggled with being coached by Bill Demott, the former NXT coach who was fired for bullying and other unsavoury practises he subjected his trainees to.

Omega hated it so much in WWE that he considered quitting wrestling completely and going to work in an airport. However, he quit WWE and went to work in the independent scene. There he had great success, and eventually led to him signing with NJPW and eventually founding AEW.

Omega has turned down multiple WWE deals since leaving, including just prior to the announcement of AEW, in 2018.

Despite not wearing “x’s” in his hands like CM Punk, Kenny Omega also follows the Straight-Edge lifestyle. His is famous for never drinking alcohol in his life and the question has been asked of him for years and years.

Omega finally confirmed what fans had been asking when he replied to a fan on Twitter in 2016. The fan asked Kenny Omega “are you Straight-Edge”, to which the former AEW Champion replied “pretty much. No alcohol, tobacco, or drugs”

Wrestlers are usually seen as tough guys who just go out to the bar get drunk and fight. Not Kenny Omega. He’d rather relax with some anime or play video games to pass the time.

Omega is a self proclaimed fan of anime. Having lived in Japan for years, he is fluent in the language and watches all sorts of anime’s produced by the Japanese.

The former IWGP Heavyweight Champion claims he enjoys watching it right before exercise, especially sports anime, as he feels it “energizes his workout”. He also claims his favourite villain is Midosuju from Yowamushi Pedal, and calls him the “Sports equivalent of Thanos” (of the Marvel Cinematic Universe).

7. He wrestled a blow up doll and a nine year old girl

When you watch wrestling, you expect to sign giants like Hulk Hogan and Big Daddy barrelling around the ring. You do not expect Kenny Omega flipping around trying to make it look like he’s being beaten up by a blow-up sex doll.

But the Japanese promotion DDT allowed Omega the creative freedom to do just that. Omega wrestled the blow up doll at a DDT show in Japan, as DDT is known for its abstract and hilarious matches. It even has a championship that has been won by a ladder, the championship belt itself and even reddit.

Omega revealed in an interview the art that went into making his match with the doll, and how he tried to add some drama and believability to the match.

“…yes, this thing (doll) is defending itself, it’s attacking, it has a chance of winning…we make people feel sorry for this thing, and make people feel as though it’s a human being putting its life on the line for the entertainment of the fans.”

Kenny Omega on wrestling a blow up doll

He also famously wrestled a nine year old girl, which gained criticism from some but was actually highly rated and a decent match.

This is certainly the most outlandish of the Kenny Omega facts on this list, and the one you’d least expect if you never knew it.

It’s not just anime and video games that inspire the Cleaner. Kenny Omega revealed in multiple interviews that he is a big fan of the classic sci-fi series “Star Trek”. He is a self-confessed Trekkie, and fans of both wrestling and Star Trek will be thrilled to call him one of their own.

He revealed in a 2018 interview about how his career was inspired by multiple things, including Star Trek. Whilst it is common knowledge that he loves video games and anime, and they have inspired his attire and moves in the ring, few people know about his love for Star Trek too.

Omega went as far to say that Star Trek “made him who is is, to some degree.”

A big claim that speaks volumes about the classic TV series. A surprising one of Kenny Omega facts.

5. AJ Styles inspired him to not quit wrestling

Back in 2006, Kenny Omega was fresh out of WWE and in a bind. He felt down about his skills as a wrestler and considered quitting the business. However he decided to give it one more shot and then if it didn’t go anywhere, he would quit for good and go and get a normal job.

Luckily during this time he came up against one of the all time great. He wrestled AJ Styles in 2006 at a PCW show, with Styles inspiring him with how well he wrestled that night. The pair had a fantastic night, and Omega knew from that moment on that he could make it in the wrestling business.

“I had this great match with AJ and, at the time, I thought, like, AJ is the top guy in TNA and If I’m kind of holding my own with a guy that’s that good, then maybe I should give wrestling more of an honest effort now that there’s actually an option again. Like it’s not WWE or nothing. Like Japan’s business was booming. TNA was also an option. So, I thought, maybe I should give it one more try.”

Kenny Omega on his 2006 bout with AJ Styles.

5. He started wrestling when he was just 15 years old

A lot of wrestlers start training when they are young. Most training schools wont accept them until their 18 or even older, so they usually wait until they are that age before they try to become a pro-wrestler.

However few have the drive to succeed that Kenny Omega has. The Winnipeg-born wrestler began training with Top Rope Championship Wrestling in Winnipeg, where he was trained by promoter, Bobby Jay. He was just 15 years old at the time and was one of the youngest wrestlers ever.

He made his debut with the promotion at 16 years old, which in most places would not even be allowed. His vast experience clearly shows as he performs incredibly every time he steps in the wrestling ring.

4. He was the first Gaijin to win the G1 Tournament

Since being renamed the G1 Climax in 1991, the historic tournament has become of the greatest tournaments in sports. Two blocks of wrestlers battle it out for weeks to find out which one has won their respective group. Then, the two winners face other for the chance to main event the Tokyo Dome at that years Wrestle Kingdom.

The competition has been one almost exclusively by Japanese wrestlers. However there is one exception. In 2016 in his first attempt, Kenny Omega won the G1 Climax and earned himself a Wrestle Kingdom match against IWGP Heavyweight Champion Kazuchika Okada. He was the first Gaijin, or foreigner, to the tournament and made history when he defeated Hirooki Goto in the G1 Finals.

3. He was the first IWGP United States Champion

However NJPW made the bold move of making their first ever champion the Japan-based Kenny Omega. He won a special tournament in the United States to become the IWGP US Champion, and defended it in some excellent matches after defeating Tomohiro Ishii in the finals of the inaugural tournament.

The championship has since been won by some huge stars including Cody Rhodes, Hiroshi Tanahashi and Jon Moxley, but Kenny Omega was the first. That will never change and is one of the indisputable Kenny Omega facts.

2. He almost signed for WWE before AEW

Just before Kenny Omega and the Young Bucks signed with AEW, there was an eleventh hour bid from WWE to sign the three stars of NJPW.

In the Young Bucks book, one of the best wrestling books around, they revealed that prior to meeting with Tony Khan of AEW, the trio met with Triple H to discuss a potential signing with WWE.

They revealed that Triple H gave them a huge offer, but the allure of building something in AEW was more attractive to them at stage of their career. It’s rumoured that WWE even offered more money than AEW but that is unconfirmed.

1. He has the highest rated match ever by Dave Meltzer

The last on the list of the Kenny Omega facts is about his incredible matches against Japanese wrestler Kazuchika Okada.

Dave Meltzer of the Wrestling Observer is famous for rating matches. Getting a five-star match rating from Meltzer is seen as a badge of honour by some wrestlers, as he is seen as the premier journalist in wresting circles.

Whilst the usual scale would go from 1 star to 5 stars, on multiple occasions Omega has smashed the scale. The most notable was when he and Kazuchika Okada received a record seven stars for the last of their four matches.

The pair fought in a two-out-of-three falls match at NJPW Dominion 6.9 in 2018, with the match lasting over an hour and featuring incredible action. Omega finally defeated his rival to win the IWGP Heavyweight Championship at the fourth time of asking and avenging his defeat to the Japanese legend from WrestleKingdom in 2017.

It remains the highest rated match by Dave Meltzer. Omega vs Okada never achieved less than six stars by Meltzer, which is an incredible feat which may never be matches.