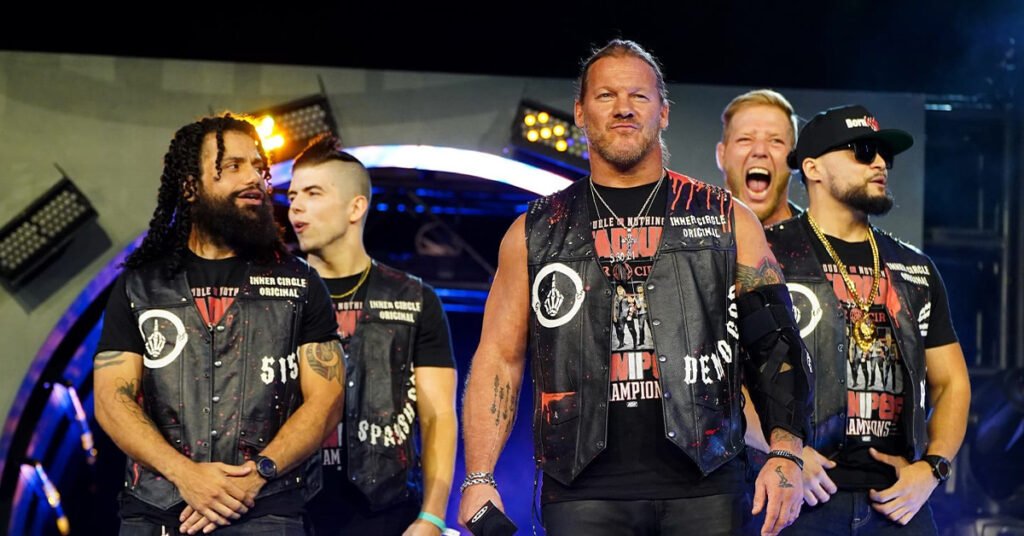 When Chris Jericho announced the Inner Circle AEW was in shock. The AEW Champion had taken some of the best up-and-coming stars in wrestling (and Jake Hager) and formed one of the most dominant teams in AEW.

Only The Elite AEW run could compare that of The Inner Circle. Chris Jericho led the team as the first ever AEW Champion, and recruited Jake Hager, Sammy Guevara and Santana & Ortiz as the founding members of the Inner Circle AEW.

The Inner Circle have main evented multiple AEW shows, whether it be in singles, tag or even multi-man matches. They took part in the first Stadium Stampede and Blood & Guts matches, tasting defeat in both matches.

With them looking set to disband, The Inner Circle AEW legacy is set to be one that will last a lifetime. When the time comes to create an AEW Hall of Fame, I’m sure Chris Jericho and co will be some of the first men to be inducted in.

So, here are the best Inner Circle AEW matches and what made them so great. If you disagree or have any matches you think may have missed out unfairly, let us know in the comments!

One of the first AEW Five-star matches Dave Meltzer rated was the 2020 Parking Lot Fight of Santana & Ortiz vs Best Friends. After destroying the minivan of Trent’s Mom Sue, Best Friend fought to avenge her by taking on the Inner Circle’s resident tag team in the parking lot outside the Daily’s Place arena.

The match was one of the best Inner Circle AEW matches, and earned every one of those five stars. The match filled with brutality, with weapons being used to draw blood from each man, and cars used as landing pads for maximum pain. This included Trent Baretta being thrown through a windscreen and both Best Friends hitting their finishing moves through tables and cars.

The highlight of the match was Orange Cassidy appearing from inside a car trunk to attack Santana and Ortiz, helping his team secure the win. Upon victory, the trio were picked up by Trent’s Mom Sue in her minivan.

As the global pandemic rages on, The Inner Circle kept on putting on classic matches in AEW. One of these was a street fight against Kenny Omega and an unusual partner in Matt Hardy, in one of the best and most exciting Inner Circle AEW performances of all time.

The match involved Le Sex Gods, the team of Chris Jericho and Sammy Guevara. At the time they were the best team in the Inner Circle, with Santana and Ortiz not being given the chance in AEW at the time.

This match took place two weeks before the Stadium Stampede match and neither of the two teams held back in the slightest. Jumping through tables, being run down by golf carts and a powerbomb of said-golf carts roof being some of the more memorable spots from the match.

Chris Jericho pinned Kenny Omega after an incredible bout, powerbombing him off the top of the golf cart roof before hitting him with The Judas Effect elbow for the victory. It would carry on the feud of The Inner Circle vs The Elite and would provide some incredible lasting images that will be shown in AEW for years to come.

Whilst in the midst of MJF’s attempt to take down the Inner Circle from the inside, he and partner Chris Jericho took on The Young Bucks at AEW Revolution 2021 for the AEW Tag Team Championship.

To earn the chance at the Champions, they defeated fellow Inner Circle AEW Tag Team hopefuls Sammy Guevara. This earned them the right to be the Inner Circles “Tag Team” in AEW, and it took them to AEW Revolution to take on then-AEW Tag Team Champions The Young Bucks.

However, it was Nick & Matt Jackson that came out winners in this match. They retained their AEW Tag Team Championships, which they would hold until All Out 2021. Nevertheless, despite the disappointing result it was still one of the best Inner Circle matches of all time.

Due to the pandemic that plagued AEW throughout 2020 and 2021, the first ever Blood & Guts match was ultimately cancelled. The match was set to pit Chris Jericho and The Inner Circle against the team of The Elite, featuring The Young Bucks, Kenny Omega, Adam Page and Cody Rhodes.

However, the match was cancelled, and Cody Rhodes was removed from the team and replaced with the newly debuted Matt Hardy. Cody Rhodes has since left AEW and signed with WWE, and we expect to see a Cody Rhodes Wrestlemania match at this years Wrestlemania.

However, while Blood and Guts was cancelled, Tony Khan pivoted and instead booked The Elite vs The Inner Circle in AEW inside the Jacksonville Jaguar’s stadium, in the first ever Stadium Stampede.

The match was pure fun. The match consisted of some hard-hitting action mixed in with some great wrestling comedy. Matt Hardy continually being reincarnated into previous gimmicks in the “Pool of Reincarnation”, and Omega and Page bonding over a glass of milk and whisky, respectively, were some of the highlights of the match.

The Elite AEW team won the match, but the match was more about the spectacle than about who won. It is one of the best AEW matches and definitely deserves a watch if you haven’t already,

One year after the match was meant to take place, The Inner Circle became one of the first teams to compete inside AEW’s most bloodthirsty match type – Blood & Guts.

The Inner Circle AEW journey to Blood & Guts began with MJF weaseling his way into the group. He then tried to disband the group from the inside, causing dissention between the Inner Circle’s members, most notably Sammy Guevara and Chris Jericho.

He soon turned on Jericho and Co, attacking the Inner Circle and forming his own stable, named the Pinnacle. The Pinnacle soon became one of the Inner Circle AEW rivals, with MJF, Wardlow, FTR and Shawn Spears filing in the numbers for the team.

They fought inside two rings, inside a giant steel cage. It was a match with harkened back to Cody Rhodes’ father’s own creation, Dusty Rhodes’ War Games match from WCW.

Whatever violent expectations led up to this match, both teams lived up to them and more. The match ended when MJF threatened to push Chris Jericho off the top of the cage, forcing the rest of the Inner Circle to submit and relinquish the win.

What do you think is the best Inner Circle AEW match? What Inner Circle match should have made this list that didn’t quite make it? Let us know in the comments or click Next Article to read more!